Are Chennai Super Kings (CSK) showing lack of intent in their run-chases?

The Chennai side now finds themselves at the bottom of the table.

It is certainly not a good time for you if you are a Chennai Super Kings (CSK) fan. The MS Dhoni-led side slumped to their third successive defeat against Sunrisers Hyderabad on October 2, 2020. And now, the three-time IPL champions are languishing at the bottom of the table.

In fact, in their last two defeats, CSK were never actually in the game and their lackadaisical approach is definitely a cause of concern for the side. Now, the question has to be asked– Are the CSK batsmen showing intent in their run chases?

CSK’s terrible record in the Powerplay

Any team that is chasing needs a good start at the top of the order. But, the ‘Yellow Brigade‘ have struggled to ‘get going’ in the Powerplay overs and that has hurt the side big time. In the table below, let us take a look at the performance of the CSK side inside the Powerplay. 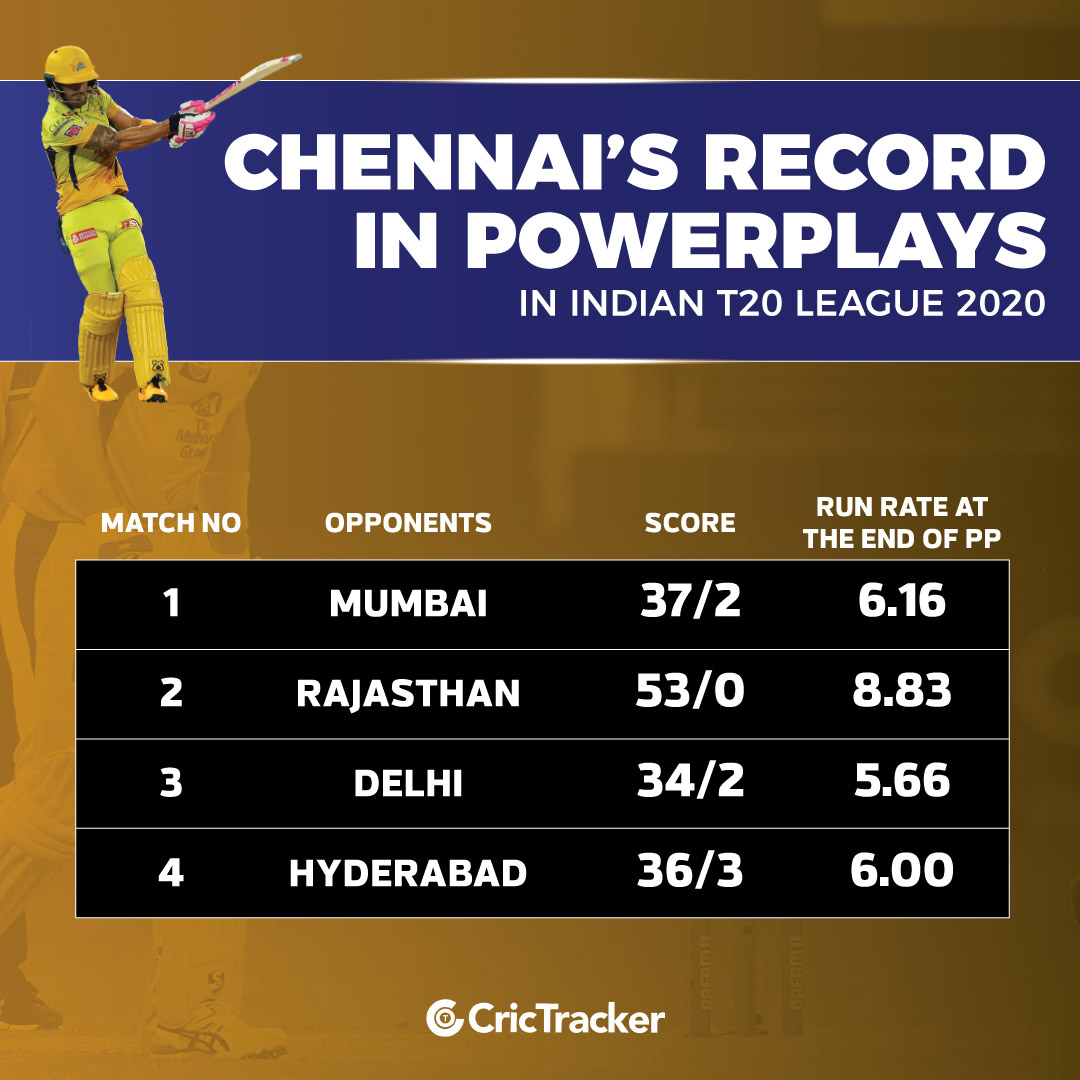 One look at this table suggests that the Chennai side has been struggling in the Powerplay overs. Barring the match against the Rajasthan Royals, the ‘Men in Yellow’ have not even been able to score at a rate of 7 runs per over in the other three encounters in the first six overs. Their top-order has not been able to give them good starts and that has hampered the three-time IPL champions.

In the table below, let us have a look at another statistic to get further clarity: 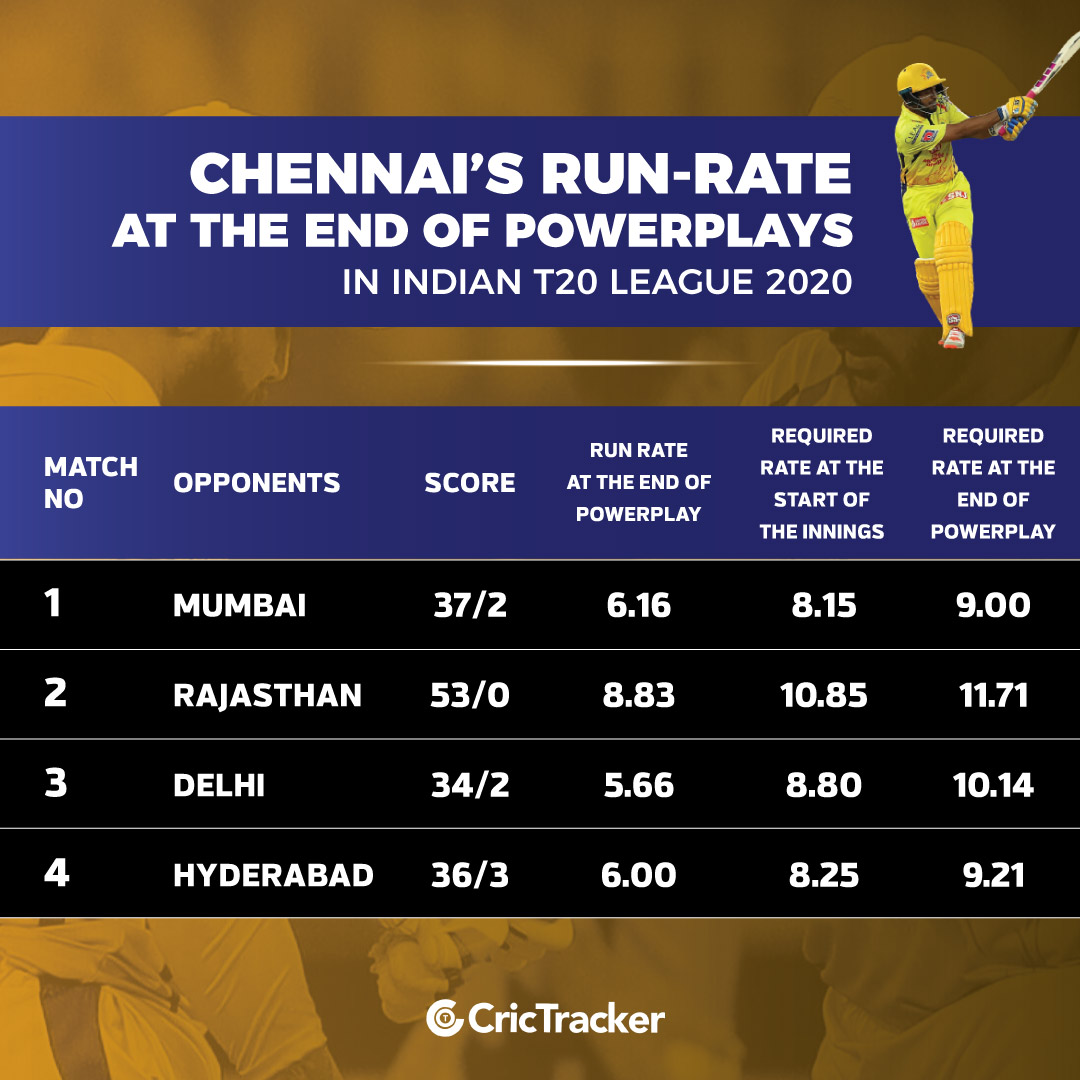 When we look at the table, we find that CSK’s woeful starts in the Powerplay have put too much pressure on the side. In fact, in every single match, they have failed to keep up with the required rate, and that has hurt the side badly. In every single game that they have played, the asking rate at the end of the Powerplay has only gone up, which suggests that they have been extremely sluggish in the first six overs.

In fact, batting legend Virender Sehwag came down extremely hard on the MS Dhoni-led side after their match against Hyderabad, and called them the ‘Chennai Test Kings’. These are the exact words from Sehwag:

“Yesterday’s match was a face-off between brains and brawn. It was ‘The Rock’ Warner vs ‘Big Brain Gabbar’ Dhoni. They say, both brains and brawn are required to win any battle but yesterday, Hyderabad’s warriors using only brawn demolished Chennai’s strategies. Chennai, who are known for their cool attitude, turned out to be fools in their own plan. Did Hyderabad win the match or did the Chennai Test Kings think they were at net practice?”

While Sehwag’s comments might be a tad too harsh, he indeed has a point to make. In their last couple of games, Chennai never really looked like they were playing to win the match. In the game against the Delhi Capitals, Chennai Super Kings were outplayed, as they finished with a total of 131/7 in reply to Delhi’s total of 175/3.

Also, even in the game against Hyderabad, Chennai’s approach was pretty ordinary. They struggled to keep up with the asking rate and were never really ‘in the game’. Is this the approach that can be expected from a side that has won the IPL trophy three times?

CSK definitely need to buckle up

The Chennai side now finds themselves at the bottom of the table. Their approach to chasing has been extremely ordinary, and this certainly does not augur well for the side going forward.

They need to be more positive in their approach and show ‘more intent’ in their batting display. And, if this approach continues, CSK will definitely find themselves in troubled waters as the tournament progresses.

Note: All stats have been taken from Howstat cricket and Cricinfo and have been updated as on 3rd October 2020