Chennai Super Kings (CSK) resurrected their batting in the game against Kings XI Punjab (KXIP). However, in the same department, they faltered big time against the Kolkata Knight Riders (KKR) on Wednesday, October 7 at the Sheikh Zayed Stadium in Abu Dhabi.

Losing by 10 runs, MS Dhoni and Co are next scheduled to face the Royal Challengers Bangalore on Saturday, October 10 in Dubai. Though the Super Kings have dominated RCB on head-to-head count, it’s the latter, who have looked the more clinical.

But even the Challengers might not be in a positive frame of mind after their 59-run loss to the Delhi Capitals (DC). In their last eight meetings, CSK have come out trumps seven times. Nevertheless, since the Super Kings aren’t in the greatest of rhythms, RCB can fancy their chances.

The pitch in Dubai has been a belter for batting and teams have reaped benefits and piled on massive runs. But it’s also pertinent to not that only one team chasing has won thus far out of ten matches.

Hence, batting first should be the way forward. The temperature will be around the 34-degrees Celsius with the humidity in the 50s. Dew many not play a huge role in the encounter.

Playing Combinations for CSK vs RCB

Ambati Rayudu played a match-winning hand against MI back on September 19. But ever since then, injuries and indifferent form have turned detrimental. But his experience against the Challengers might just work wonders, both for him and CSK.

Virat Kohli got his form back against the Rajasthan Royals (RR), but then floundered last time around. If RCB are to make the playoffs, Virat has to be on top of his game. He has decent numbers against CSK, playing 24 matches since 2008.

The right-hander has 747 runs at an average and strike-rate of 37.35 and 124.09. The RCB captain also has six half-centuries to show for his efforts.

CSK vs RCB Head to Head 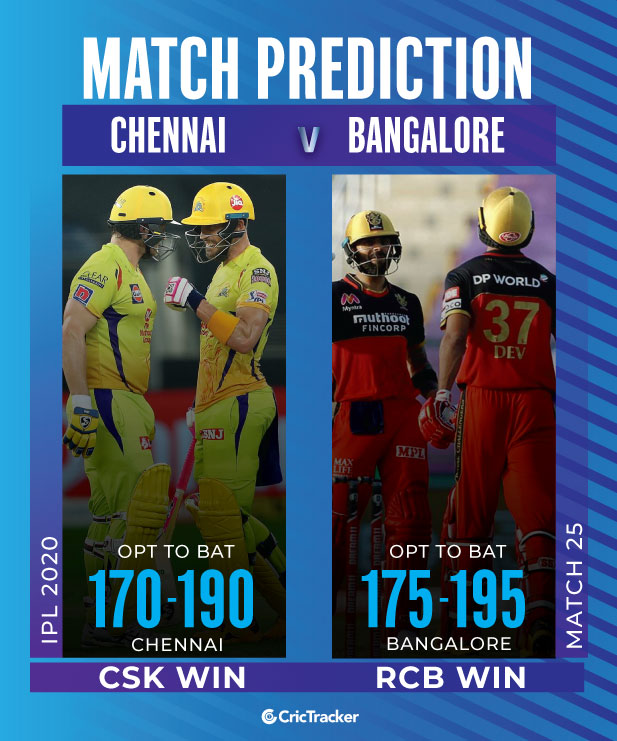