After a brilliant performance against Kent in the quarter-final, Surrey are expected to beat Gloucestershire in the semis.

The 1st Semifinal of the Vitality Blast 2020 will be played between Surrey and Gloucestershire at the Edgbaston, Birmingham.

The two sides who will lock horns for the first semi-final of this edition’s T20 Blast did not only have a great outing in the group stages, but they proved their calibre in the quarter-finals. Against fellow group member Kent, Surrey exhibited their brilliance in both batting and bowling departments.

They won the game by a big margin of 56 runs. On the other hand, Gloucestershire’s bowlers spotted fire while bowling first against Northamptonshire. Their batsmen also did a fairly decent job, as they secured a comfortable win by 7 wickets.

This section might be full of doom and gloom for the cricket fans, as there are 90% chances of precipitation. The temperate is expected to be around 11° C.

The pitch at Edgbaston has been fairly helpful to the batsman. However, things get a little tricky once we enter the latter stages of the game. Anything under 180 should be considered below par.

180 (Last five games played at this venue in this tournament)

Will Jacks has scored 290 runs in the 10 innings he has batted so far. He has an average of over 40 and a strike rate of over 150. He has also been phenomenal with the ball and has provided Surrey with 10 breakthroughs.

Ian Cockbain is the leading run-getter for Gloucestershire with 399 runs in 10 matches, which includes 3 half-centuries. He has a fiery strike rate of over 170 and an average of nearly 50.

Ryan Higgins has scored 181 runs so far, at an average of over 30. He is also Gloucestershire’s leading wicket-taker, having picked up 16 wickets in 10 games.

Hashim Amla has scored 268 runs in 7 matches. Though his strike rate of under 130 might not be too impressive, he is a reliable source of runs and has a very impressive average of nearly 45. 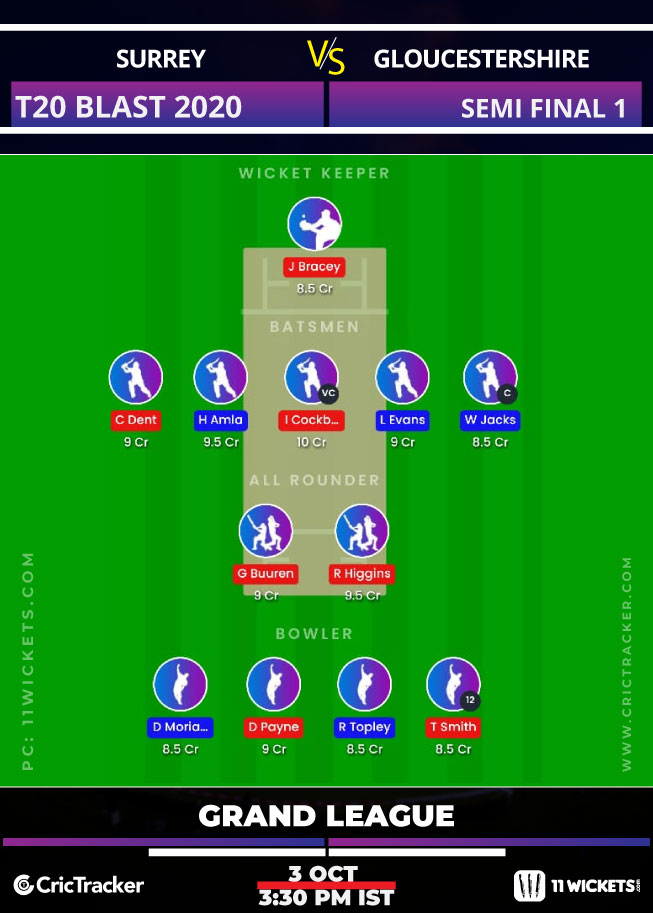 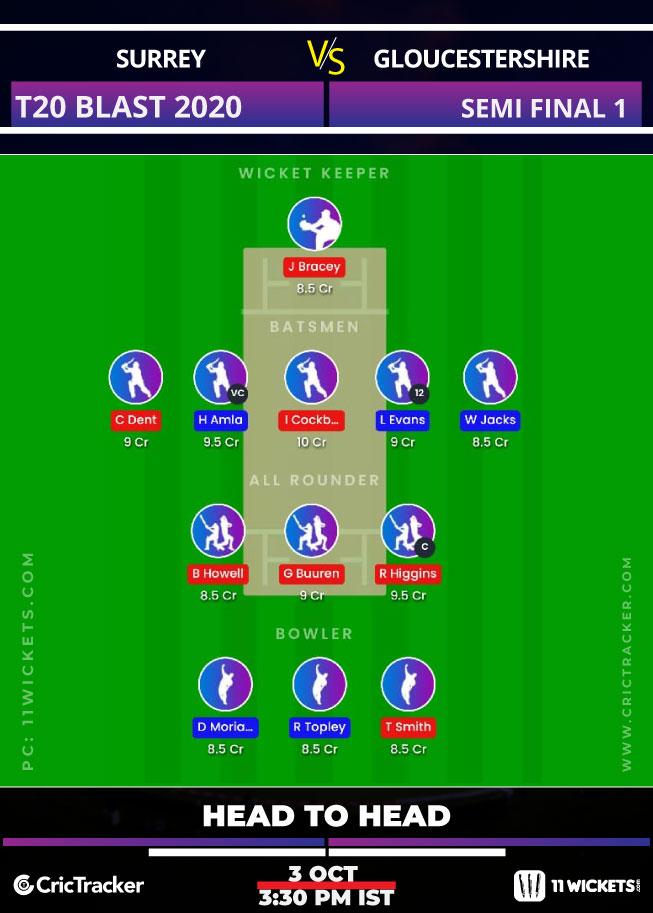 Daniel Moriarty is having a great season with the ball. He has picked up 15 wickets so far, with his average being under 20 and his economy rate being 6.67 runs per over. He should get a place in your 11Wickets fantasy side.

Surrey are predicted to win this match.