Has the T20 format turned extremely cruel for the bowlers?

The batsmen are clobbering the ball all around the park, and the bowlers are left with absolutely nothing to do.

Two consecutive days, and we have had two nerve wrenching matches. If the Rahul Tewatia show made the fans hold their breath on 27th September 2020, then the Kieron Pollard-Ishan Kishan assault on 28th September 2020 had the fans at the edge of their seats. The IPL has already produced two encounters that have made the spectators cringe in sheer disbelief.

But then, amidst all this hullabaloo, there is one pertinent question that needs an answer. Has the T20 format turned extremely cruel for the bowlers that they have absolutely no respite?

Has the T20 format become so cruel for the bowlers?

This is just insane. The batsmen are clobbering the ball all around the park, and the bowlers are left with absolutely nothing to do.

The case for Washington Sundar

In a game that was totally dominated by the willow yesterday, there was a spinner whose performance with the ball was absolutely scintillating. Washington Sundar gave away just 12 runs from his 4 overs, and his economy rate was a miserly 3 runs per over.

In the table below, let us have a look at the performances of the RCB bowlers in yesterday’s encounter to fully understand the impact of Washington Sundar’s spell. 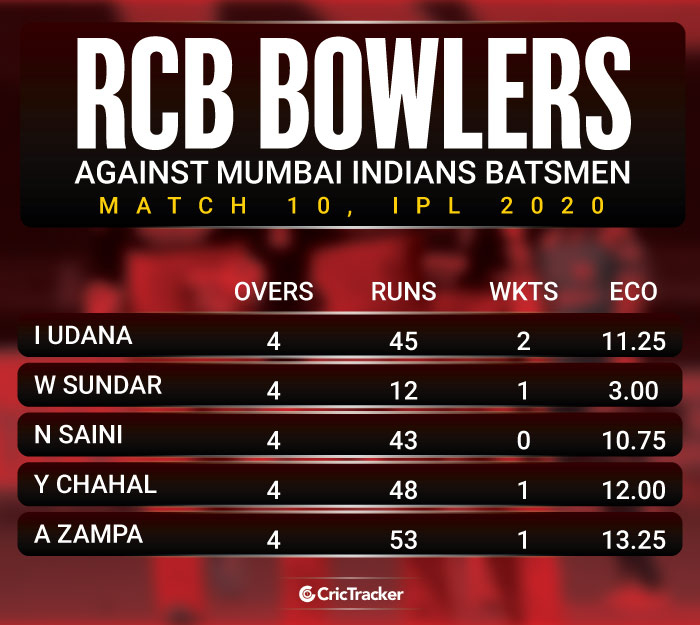 One look at the table can make us understand that Sundar’s spell in yesterday’s game stands out for its sheer absurdity. Not a single bowler from the RCB outfit went at an economy rate of even less than 10 runs an over, except the off-spinner. And, Sundar’s spell stands out as he went for 12 runs in his 4 overs, at an economy rate of just 3 runs an over.

Also, in the 24 balls that he bowled, 54.16 per cent of the deliveries that he bowled were dot balls and that built the pressure on the Mumbai Indians. Also, Sundar did not even concede a single boundary in his 4 over spell and frustrated the Mumbai batsmen by bowling stump to stump. And of course, he scalped the prized wicket of MI skipper Rohit Sharma.

In a game where bat dominated the ball, Sundar’s bowling effort certainly needs a special mention. But then, in all the cacophony surrounding the counter-attacking Pollard-Kishan partnership, in the amount of adulation showered on De Villiers’ batting Genius, and in all the talk about Finch’s brute power, Sundar’s performances have not got the recognition it deserves.

The game is no longer ‘balanced’

Shorter boundaries and bigger bats have turned the game overwhelmingly in favour of the batsman today. We have come to a stage where even 250 is not a safe total in T20 cricket and the 300 run mark might be breached in the near future.

The bowlers are left with absolutely nothing to do, as the batsmen go about clobbering them all around the park. Even though it can produce some fireworks with the bat, the game is no longer ‘balanced’ between bat and ball. And, if this trend continues, it is certainly not good for the game of cricket in the long run.

Note: All the stats have been taken from Cricinfo and have been updated as on 29th September 2020 till the RCB vs MI match