Highest strike-rate in an IPL innings

Krunal Pandya scored 20* at a strike-rate of 500 against SRH on Sunday.

The 13th edition of the Indian Premier League (IPL) is curently in progress in the UAE with eight teams fighting for the glory. It has been intense action so far in the tournament with two matches already going into the super over. Moreover, the fans have also witnessed a lot of high-scoring encounters with the batsmen taking the attack to the opposition in the death overs.

The strike-rates of the batsmen has been sky-high in the last five overs and Mumbai Indians’ (MI) Krunal Pandya managed to stun the Sunrisers Hyderbad (SRH) bowlers in Sharjah with his batting on Sunday afternoon. He came out to bat with only four balls left in the innings and ended up smashing 20 runs with two sixes and as many fours. His 20* off just 4 balls helped MI post a huge total of 208 runs on the board.

Interestingly, Krunal Pandya now has the highest strike-rate in an innings in IPL among batsmen who scored minimum 10 runs. His strike-rate was a mammoth 500 during his quick-fire knock and went past Deepak Hooda who had scored an unbeaten 14 off just 3 balls last season while playing for SRH against Kings XI Punjab (KXIP). His strike-rate during the explosive innings read 466.67.

The next batsman in this list Laxmi Ratan Shukla who also scored 14 runs off 3 balls against Deccan Chargers in the inaugural edition of the IPL. Naman Ojha, Jofra Archer and Cameron White are the other three batsmen in this list to give a powerful finish to the innings coming down the order. They scored an unbeaten 13 at a strike-rate of 433.33 with two sixes and helping the team finish on a high.

Archer, however, managed such an explosive knock earlier in the ongoing season during the record chase while batting for the Rajasthan Royals against the KXIP. They were chasing 224 to win the game and the England pacer did his bit to take the team close to the victory with his 3-ball 13-run knock and remained unbeaten to celebrate the victory in the middle.

Highest strike-rate in an IPL innings: 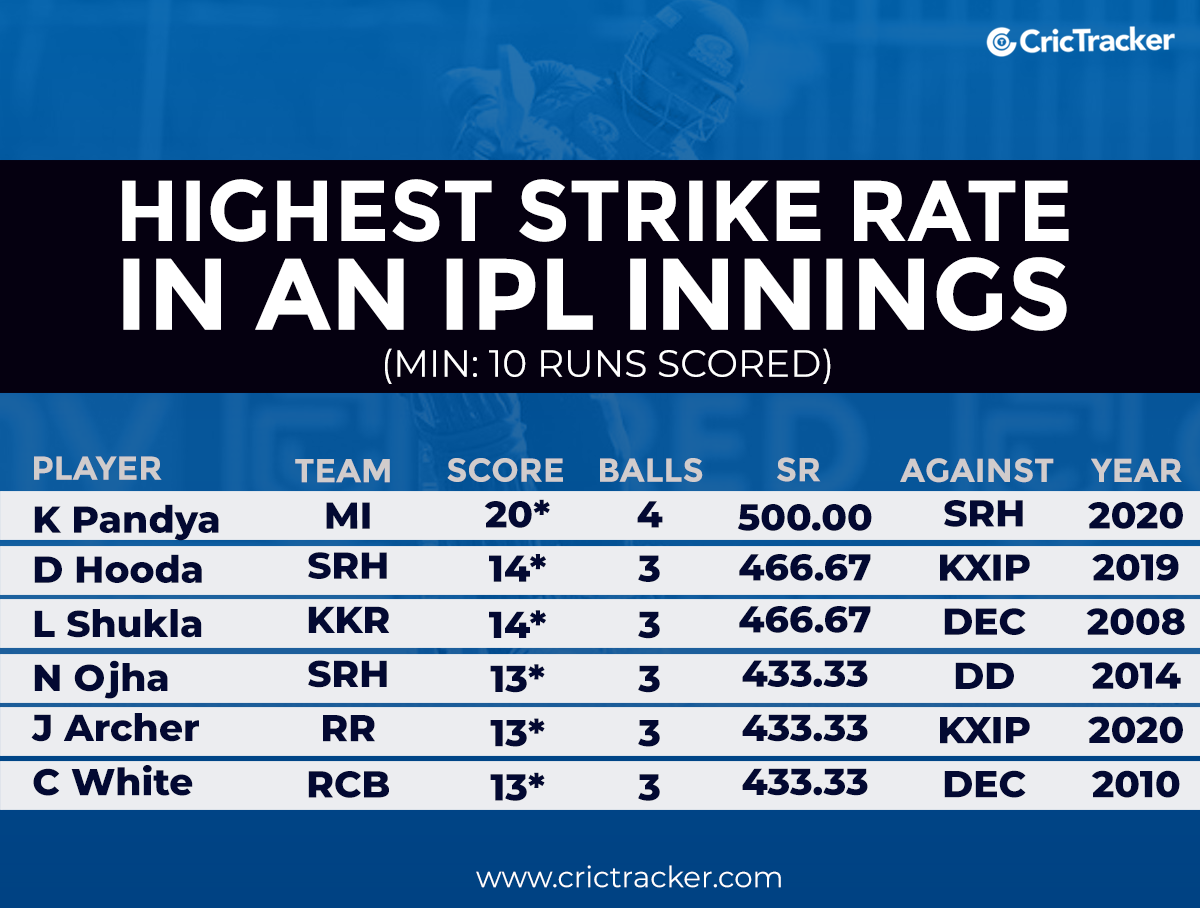