David Warner has 829 runs against the Knights from 21 matches with two centuries.

Kolkata Knight Riders (KKR) and Sunrisers Hyderabad (SRH) are the only teams, who are yet to register a victory in the 2020 Indian Premier League (IPL). The Knights started their campaign with a 49-run defeat at the hands of the Mumbai Indians (MI) at the Sheikh Zayed Stadium.

Their next match is against David Warner’s SRH on Saturday, September 26 at the Sharjah Cricket Stadium. The Sunrisers, on the other hand, could have had a winning start against the Royal Challengers Bangalore (RCB).

But luck eluded them as they underwent a serious batting collage. Also, injuries to Kane Williamson and Mitchell Marsh have kept them on their toes. Both teams had their travails in their respective opening matches and they would desperate to find some much-needed rhythm.

The conditions in Sharjah are expected to be in favour of the batting unit. Bowlers may not find it easy to keep the batsmen quiet. The short boundaries won’t help them either. Another run-fest in Sharjah seems to be on the cards. The conditions are expected to be warm with the temperature around 34 degrees Celsius. The humidity will be in the 50s with dew to play as a factor.

Playing Combinations for KKR vs SRH

Kuldeep Yadav’s IPL numbers from 2018 onwards aren’t all that great. However, he has made inroads in the SRH batting lineup. In eight games against the Orange Army, Kuldeep has 10 wickets at an economy of 7.80 with a strike-rate of 18. He got those scalps in 30 overs. In fact, in his IPL career, the chinaman bowler has picked up the most wickets versus the Sunrisers itself.

David Warner has taken a liking to the KKR bowling attack over the last few years. In 21 matches against them, the southpaw has a stunning 829 runs at an average and strike-rate of 43.63 and 147.77 respectively. He also has a couple of centuries and four half-centuries to go with a top score of 126. It goes without saying that the Knights have to get rid of the SRH captain at the earliest.

The prediction is for Kolkata Knight Riders to win the match. 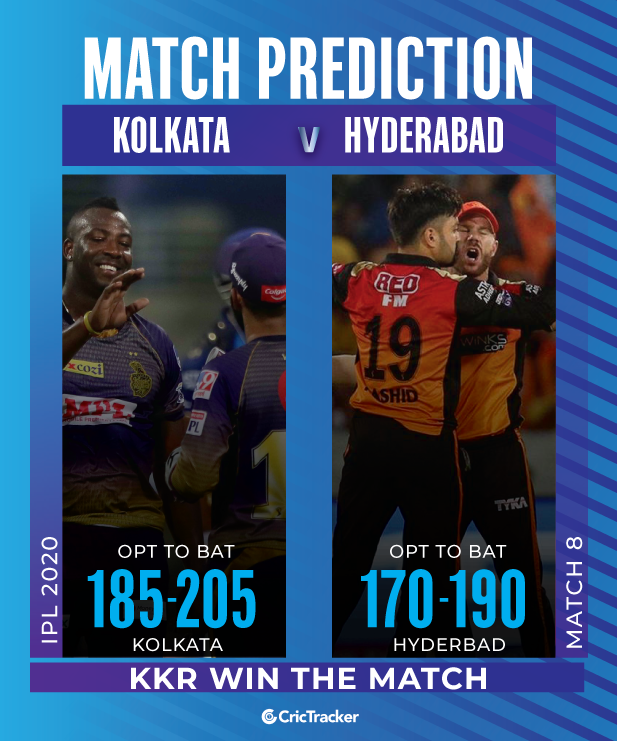