After the RCB vs MI game, Delhi Capitals are on top of the points table by winning both their matches in IPL 2020

The two big names of the Indian side were stacked against each other for their respective teams to set the stage on fire for the 10th game of the IPL 2020. Virat Kohli-led Royal Challengers Bangalore (RCB), and Rohit Sharma-led Mumbai Indians (MI) locked horns in Dubai where RCB clinched the game in super over thriller. Virat Kohli and his men showed up with the willow first and on the back of their batsmen, scored heavy 201/3 on board.

The RCB squad was backed up by three terrific half-centuries in the form of Devdutt Padikkal (54 off 40), Aaron Finch (52 off 35), and AB de Villiers (55 off 24). Shivam Dube’s quickfire of 27 runs, in the end, pushed RCB to enter the 200 club and post a handsome score. None of the bowlers from the Mumbai squad could get comfortable with the ball.

Washington Sundar had the perfect spell in the game

Chasing the heavy target, the openers flopped terribly and didn’t fetch the required things. However, Mumbai saw a twist of the plot when the duo of Kieron Pollard and Ishan Kishan stunned the opponents in no time. Ishan Kishan’s 99 off 58 and Pollard’s 60* off 24 bought Mumbai just next to the victory before the game slipped into the dramatic super over. RCB’s spin show was perfect, where Washington Sundar remained incredible by conceding just 12 runs in four overs.

Navdeep Saini was exceptional was superb in the super over as he conceded only 7 runs and the RCB batsmen then got those runs off the final ball to notch their second win of the season and climb in the points table.

Who has orange and purple cup?

After RCB’s second win in the tournament, they have bagged four points in their account. After the RCB vs MI game, Delhi Capitals are on top by winning both their matches. Rajasthan Royals are at the second spot, followed by Royal Challengers Bangalore in the third position. Delhi, Rajasthan, Bangalore, and Punjab currently form the top four on the points table.

KL Rahul still remains the proud orange cap holder in the game, with 222 runs in the league. Second in the race is his teammate Mayank Agarwal with 221 runs, followed by Faf du Plessis, Sanju Samson, and Steve Smith on 3rd, 4th and 5th position respectively.

Mohammed Shami retains the purple cap with seven wickets in the IPL 2020. He is followed by Kagiso Rabada, Sam Curran, and Sheldon Cottrell in the list.

Here are the leading run-getters of the IPL 2020:

Here are the leading wicket-takers of IPL 2020: 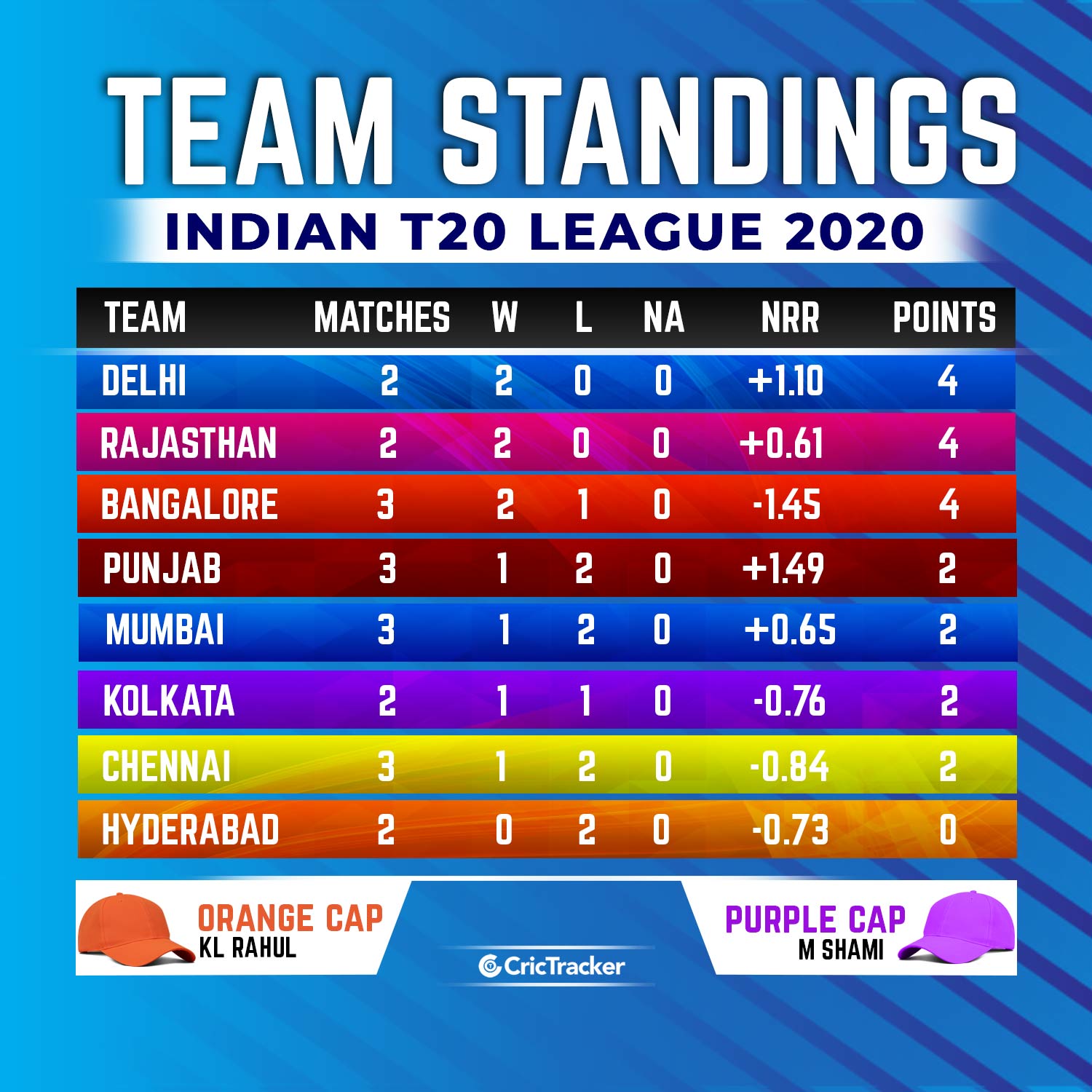