Of the four half-centurions during KXP vs KKR, only two ended up with positive impact rating.

Some strange tactics from Kolkata Knight Riders have got them over the line while defending targets of 160s in successive matches. The KKR team won the previous game despite CSK were 90/1 chasing 168 at halfway stage. On Saturday, the Kings XI Punjab were only 21 runs away from the win in 17 deliveries with nine wickets in hand. Two back to back good overs by Sunil Narine and Prasidh Krishna pushed pressure back on to KXIP who failed to chase 14 runs in the final over and lost by two runs.

The best performance with the ball came from Prasidh Krishna who took three wickets for only 29 runs. Prasidh’s three wickets included his fellow Karnataka-mates KL Rahul and Mayank Agarwal. Prasidh’s bowling effort held an impact of 10.81 which is the best among the bowlers in KXIP vs KKR. Sunil Narine, who turned the game on its head, earned an impact rating of 8.55. The West Indian spinner got an impact rating of 8.55 for his figures of 2/28 which included the match-turning wicket of Nicholas Pooran. 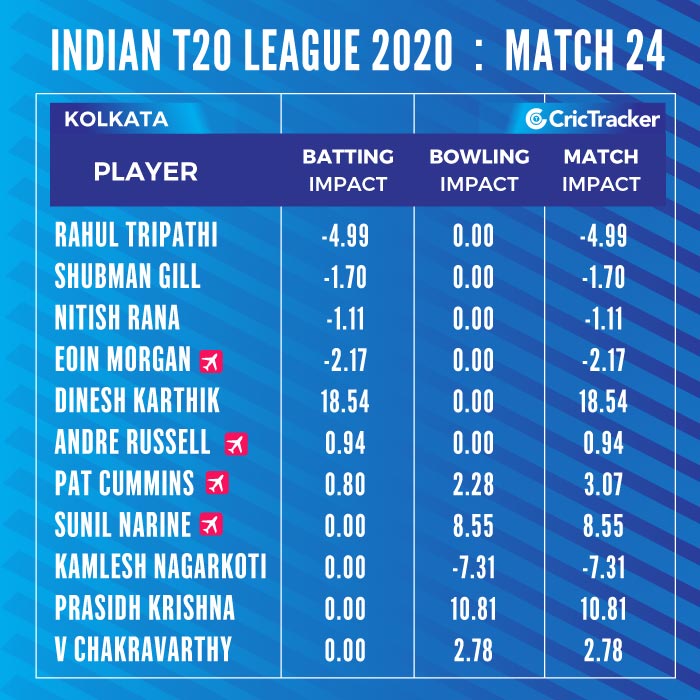 The Kings XI also had two such bowling performances one of them coming from Arshdeep Singh who had analyses of 4-1-25-1. The left-arm pacer managed to deceive Andre Russell and played a key role in cutting down at least 15 runs to Kolkata Knight Riders’ total. His effort earned an impact of 9.29 which was more than even that of Narine’s. Leg-spinner Ravi Bishnoi recorded 2nd best bowling impact in KXIP vs KKR for Punjab franchise of 6.79 for his 1/25 in four overs which included Eoin Morgan’s wicket.

Talking about batting contributions, Dinesh Karthik’s 22-ball fifty earned an impact rating of 18.54; the highest for any player in the whole match. Another half-centurion for KKR, Shubman Gill ended up with a negative rating for not scoring enough runs for the time he spent. Even KL Rahul earned negative rating despite being the top-scorer of KXIP vs KKR. Rahul scored only 74 runs despite facing 58 balls; almost half of the team’s inning. Mayank Agarwal’s quick-fire fifty held an impact of +8.77. 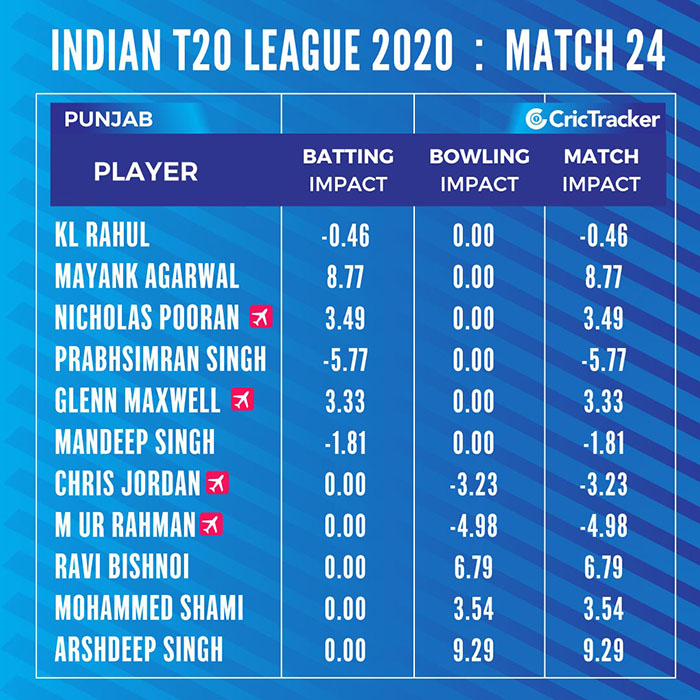