Riyan Parag and Rahul Tewatia turned the game into Rajasthan’s hands out of nowhere.

The much-awaited win for the Rajasthan Royals came on Sunday who defeated Sunrisers Hyderabad by five wickets to end their 4-match losing streak. Royals were 78/5 in 12 overs chasing 159 to win before they pulled off a thriller. Riyan Parag, with an unbeaten 26-ball 42 and Rahul Tewatia, with an unbeaten 45 off 28 balls got through the chase by sharing an unbeaten 85-run stand in just 47 deliveries. Riyan, who was dropped in previous two matches, produced a knock with an impact of 14.26 on his comeback in SRH vs RR.

His partner Tewatia’s knock was even more valuable as it got an impact rating of 16.39 as he struck hat-trick fours to Rashid. Tewatia’s match impact came down to 14.6 as he failed to make an impact with the ball but it still remained the highest in the match. For the Royals, Jofra Archer’s bowling performance played a key role in restricting the Sunrisers early on. Archer finished with 1/25 but had conceded just six runs in his first three overs. The England pacer got an impact rating of 7.24 for his efforts in SRH vs RR. 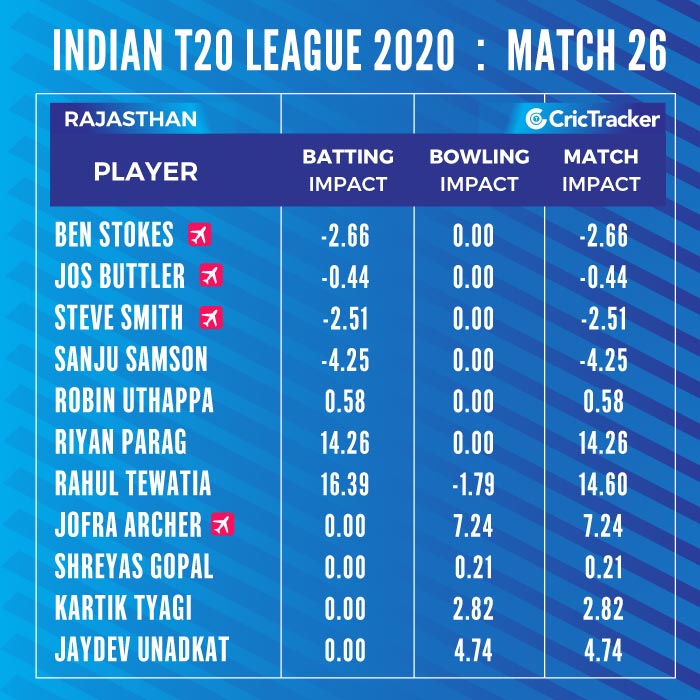 Sunrisers Hyderabad looked on the top due to a brilliant bowling performance from Rashid Khan whose 2/25 held an impact of 10.77; the most impactful bowling effort of SRH vs RR while Khaleel Ahmed got an impact rating of 6.36 for his early wickets. When it comes to batting, the SRH’s top three didn’t make impactful performances. However, Kane Williamson and Priyam Garg added quick runs and earned an impact rating over six. The duo put on 38 in the last 14 deliveries to take Sunrisers close to the 160-run mark.

Jonny Bairstow’s inning of 19-ball 16 earned a negative impact of -9.24 which was the worst in the whole match. The England keeper-batsman batted for more than half of the powerplay and managed to hit just one boundary; the ball before which he got out. David Warner, who showed signs of acceleration during the middle overs, finished with 48 off 38 balls and earned an impact of only 1.52. Manish Pandey struck 54 off 44 balls which held an impact rating of almost 0 due to the slow start he got in SRH vs RR. 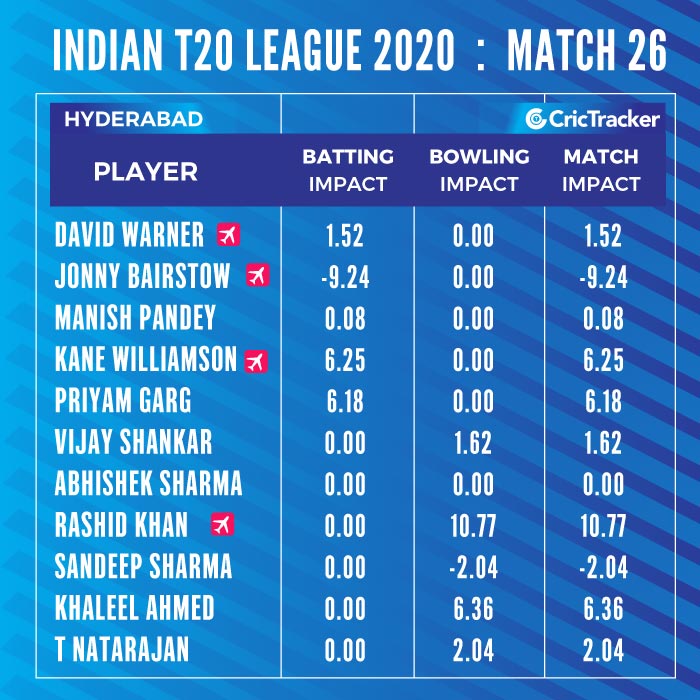