Yusuf Pathan, who had slammed a 37-ball ton against Mumbai Indians in 2010, stands first in the list.

Aiming to continue their winning momentum, KL Rahul-led Kings XI Punjab locked horns with Rajasthan Royals in the ninth match of the IPL 2020. After being put to bat first, KXIP were hoping to witness a blistering knock from their in-form opening duo of skipper Rahul and Mayank Agarwal.

While Mayank had slammed an impressive 89-run knock in their opening IPL 2020 fixture against Delhi Capitals, skipper Rahul had stole the show with his unbeaten 69-ball 132 against Royal Challengers Bangalore.

The Rahul-Mayank duo, as expected, wreaked havoc on Rajasthan Royals’ bowling set-up too. The destructive pair started off in an excellent way and stitched highest Powerplay score of this season (60/1). It was raining boundaries in Sharjah as Rahul-Mayank’s fury left RR bowlers gasping for breath.

Mayank, from the start, looked in spectacular touch and skipper Rahul consequently donned the sidekick’s role. After missing out on his ton against the Delhi side, Mayank ensured that he ticks that box in this game. While Rahul kept hitting boundaries from the other end, it was Mayank who was on song at Sharjah. He notched up his maiden ton in just 45 deliveries and paved his way into the elite list of fastest IPL centuries by Indian players.

Stitching his blistering knock around 10 fours and 7 sixes, Mayank smashed the second-fastest hundred by an Indian in the IPL history. Yusuf Pathan, who had slammed a 37-ball ton against Mumbai Indians in 2010, stands first in the list of fastest IPL centuries by Indian players. While playing for Rajasthan Royals, Yusuf had demolished the Mumbai side with his fireworks.

The third in the list is Chennai Super Kings’ Murali Vijay, who had slammed a 46-ball hundred against Rajasthan Royals in 2010. Virat Kolhi and Virender Sehwag are poised at fourth and fifth place in the list, having scored their IPL centuries in 47 and 48 balls respectively.

After slamming 106 off just 50 balls, Mayank eventually departed off a Tom Curran’s full toss delivery. Rahul also followed him in the next over after scoring 69 off 54 deliveries. The pair had already done its job as KXIP managed to amass a mammoth 223-run total on the scoreboard. 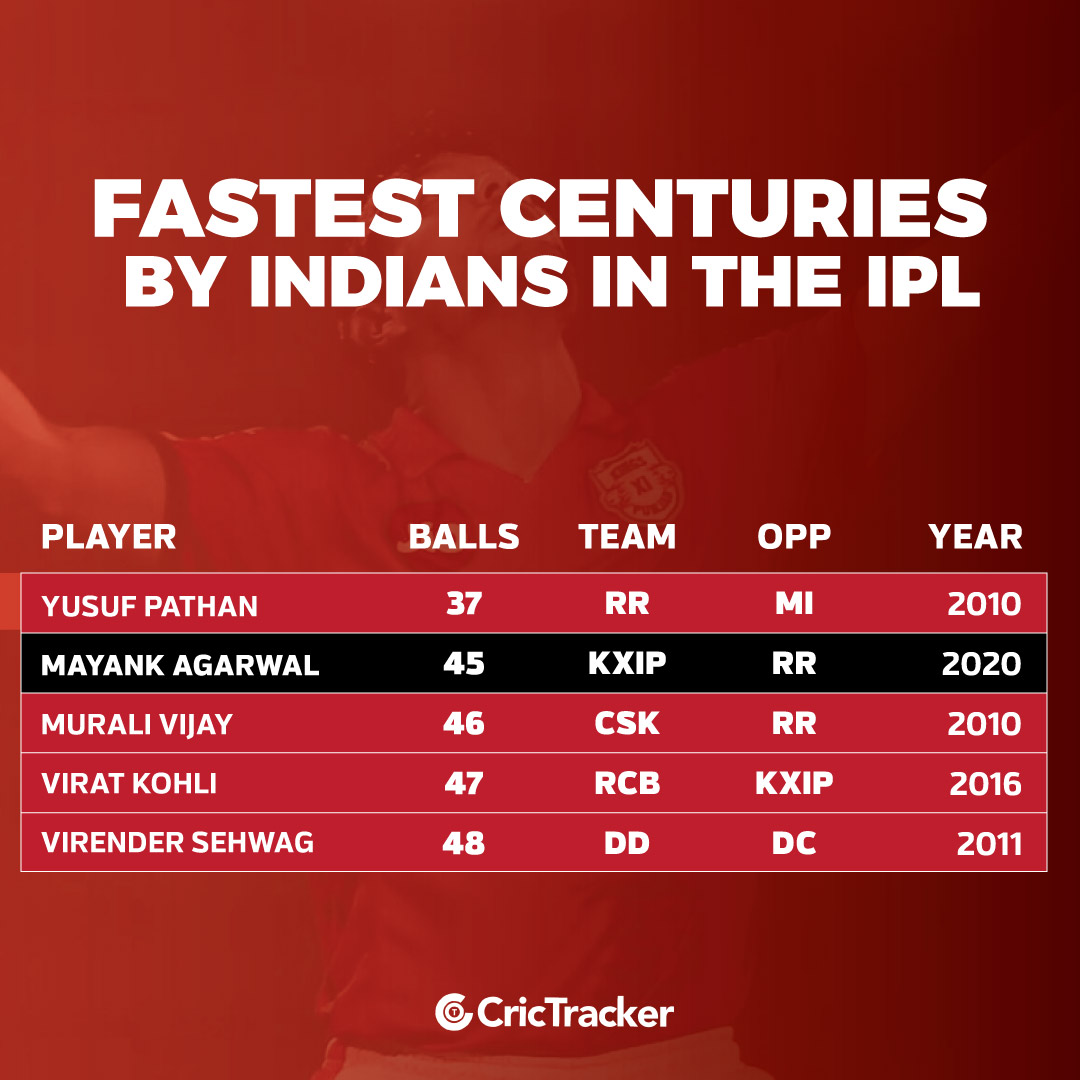