Mumbai Indians (MI) began their 2020 Indian Premier League (IPL) with a five-wicket defeat over the Chennai Super Kings (CSK). Ever since then, Rohit Sharma’s men have looked clinical, to say the least. In six games, they have won four and have eight points in their kitty.

Moreover, they also have a net run rate of +1.488, which is also the highest among all the eight participating teams in the T20 event.  Rohit and Co are next scheduled to lock horns with the Delhi Capitals (DC) on Sunday, October 11 at the Sheikh Zayed Stadium in Abu Dhabi.

The Capitals have been on a rampage as well of late. Having last beaten the Rajasthan Royals (RR) in Sharjah by 46 runs, Steve Smith a and Co are sitting pretty on top of the points table. Moreover, MI are yet to beat DC outside India out of three attempts.

The pitch in Abu Dhabi has been an excellent one for batting. Mumbai Indians have played quite a few games at the venue and know the conditions better than any other team. It’s been a track where both the team, batting first and side batting second have reaped benefits.

It’s also expected to help the spinners to quite some extent. The temperature will be around the 32 degrees Celsius mark with the humidity in the low-50s

Playing Combinations for MI vs DC

Rohit Sharma is currently the leading run-scorer for MI in the ongoing IPL with 211 runs at an average of 35.16. His numbers against the Capitals are also pretty impressive.

In 25 innings, he has 745 runs at an average and strike-rate of 33.86 and 135.21 respectively to go with four half-centuries. Rohit has all the experience under his belt and he is expected to do well next time.

Rishabh Pant can hit the long ball and he has proven his talent time and again. In the ongoing IPL, he has played some useful knocks lower down the order, scoring 30s and 40s on a consistent basis. He has done pretty well against MI as well.

MI vs DC Head to Head 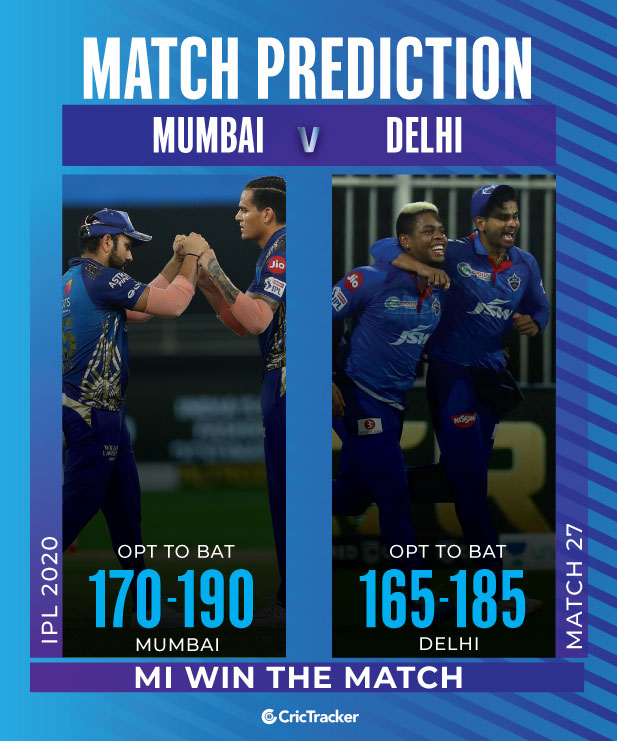