MS Dhoni also became the most capped player in the IPL.

MS Dhoni’s Chennai Super Kings (CSK) was up against David Warner’s Sunrisers Hyderabad in the 14th match of the Indian Premier League (IPL) at the Sheikh Zayed Stadium, Abu Dhabi on Friday (October 2). The two teams were coming in the contest with similar fates as they had lost two out of the three games.

Batting first, Sunrisers had a shaky start as their four main batsmen including the likes of Jonny Bairstow, David Warner, Manish Pandey and Kane Williamson went back to the pavilion quite early and the team was reduced to a paltry total of 69/4 within 11 overs. However, SRH found a new hero in Priyam Garg and all-rounder Abhishek Sharma. The two youngsters came together and batted for 7 seven overs scoring 51* off 26 and 31 off 24 respectively to take their team to a respectable total of 164/5 in the 20 overs game.

In reply, the CSK contingent was found struggling as it was struggling at 36/3 at one stage. This is when MS Dhoni and Ravindra Jadeja stepped in to restructure the innings. However, it was yet another painful chase for the Yellow Army as the rebuilding of innings from the start led to the required run-rate shooting up.

All this boiled down to the new-comer Abdul Samad bowling to MS Dhoni and Sam Curran to defend 28 runs off the last 6 balls. Despite coming close to the total, Super Kings lost the match by 7 runs.

MS Dhoni holds a unique record under his name

Though CSK lost its third consecutive match on Friday, the captain MS Dhoni registered another feather to his illustrious cricket career. Dhoni becomes the only Indian and fifth overall batsman to play 100 or more innings without scoring a duck in the shortest format of the game. MS has not gone back to the pavilion without scoring a run since 2015 and in the last game against Hyderabad, he played his 100th consecutive innings without a duck.

The number 1 position in this list is acquired by West Indies power-hitter Chris Gayle who has played a record 145 T20 innings without scoring a duck in the time span of 2012 to 2016. The second place is held by Sri Lanka’s Dinesh Chandimal with 106* innings from 2009 to present. He is followed by Australia’s Shaun Marsh who has played 102 innings without getting out on zero from 2012 – 2019. South Africa’s JP Duminy is next with 101* innings to his name from 2014 to 2019. 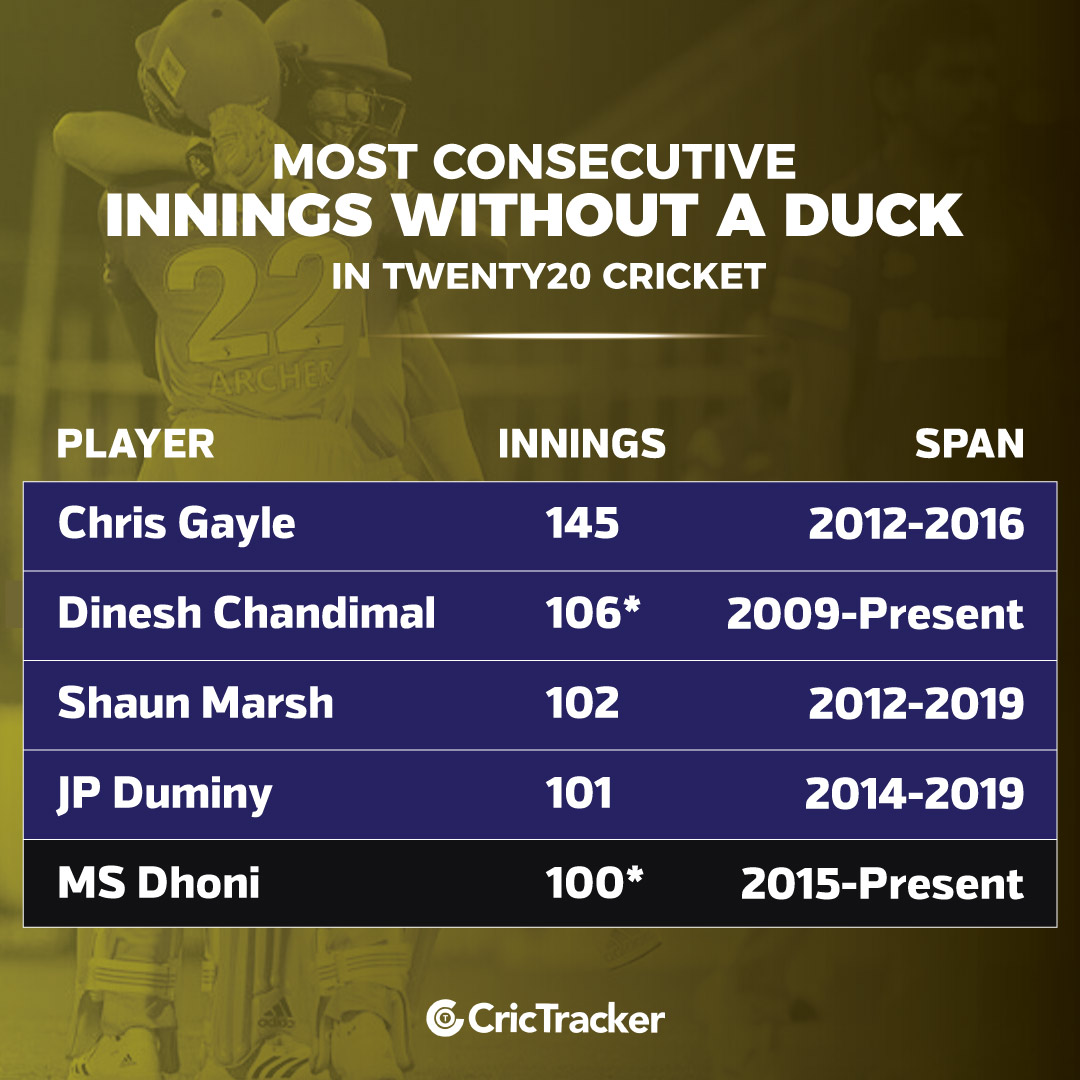