Who should be made captain in Fantasy for this match between Mumbai and Hyderabad? 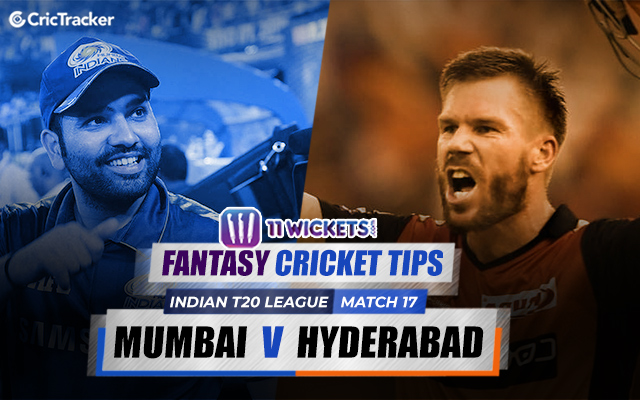 The 17th match of the Indian T20 League 2020 will be played between Delhi and Kolkata at the Sharjah Cricket Stadium in Sharjah.

This game is scheduled to start at 03:30 PM IST (02:00 PM local time) (10:00 PM UTC). The game will be telecasted on the Star Sports Network (Available in English, Hindi, Telugu, Tamil, Kannada, and Bengali). Also, live streaming will be available on Disney+ Hotstar.

The beauty of this match is that both the teams involved are currently enjoying a winning run and one of them will end up losing in Sharjah. Mumbai did start slow against Chennai and had a chance of winning the match against Bangalore; one that looked as dead as a rubber. Mumbai currently does not have much to worry about as the team is performing as a unit and their pace attack has been impressive. Bumrah is yet to join the party but sooner or later, he will.

Hyderabad, on the other hand, received a major boost from the way their middle-order played in the match against CSK. With the top four batsmen out, young Priyam Garg and his U19 teammate, Abhishek Sharma carried the team to a total of 164. This takes a massive load off Warner and Bairstow’s shoulders as it will now give the squad confidence in their middle-order; something that has been lacking all these years.

The weather at Sharjah is conducive for a full game but it will be relentless. Being an afternoon game, temperatures are expected to hit 37°C and stay in the vicinity of that number for the most part of that match. There will be a bit of humidity as well.

The track at Sharjah has got a lot of bounce on offer. The ball has been coming on nicely on to the bat and with the short boundaries in store, one can expect a six-hitting fest. There is not much for the bowlers on this pitch but spinners might have a crucial role to play in deciding the outcome of the match.

Average first innings score: 220 (Based on the 2 games played on this venue)

We saw Bhuvneshwar Kumar walk off the field in the penultimate over of the game against Chennai. He held his left hamstring as he walked off. There has been no update on his injury yet.

Priyam Garg (8.5 credits) – Hyderabad’s middle-order officially joined the party in the match against Chennai when the duo of Garg and Sharma decided to rescue their team from a precarious position of 69-4. Garg has shown us what he is capable of and is a good steal pick for this particular match. He scored a brilliant 26-ball 51 and there is no reason why you should not include him in your team.

Kane Williamson (8.5 credits) – The Kiwi captain has been in a good patch of form in this tournament. He is a vital cog in the Hyderabad batting line-up and has shown us that he can hit sixes, even though they might not travel much. Sharjah certainly has a lot to offer and Williamson will be hoping to make the most of it.

Ishan Kishan (8.5 credits) – Ishan Kishan has matured a lot as a player and that became evident in his knock of 99 from 58 deliveries. He has understood the importance of starts and then building on them. He has scored 127 runs from 2 innings and is in the contention for the orange cap. 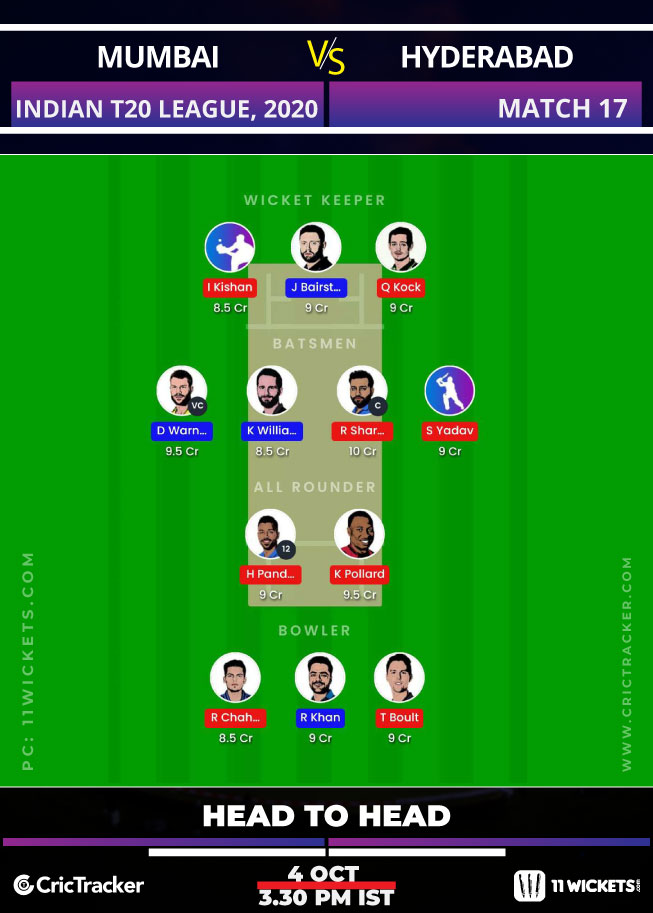 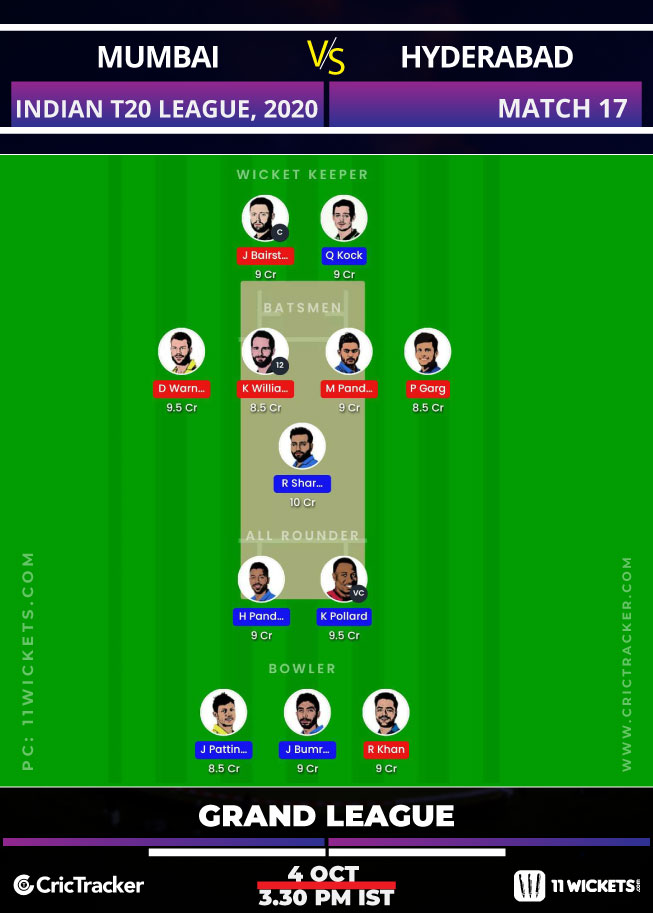 The boundaries at Sharjah are very small and one can expect many sixes. Both the teams have a very solid top four and it is advisable to have plenty of hitting options in your squad as this ground has proved to be a nightmare for the bowlers.

Mumbai are expected to win this match.