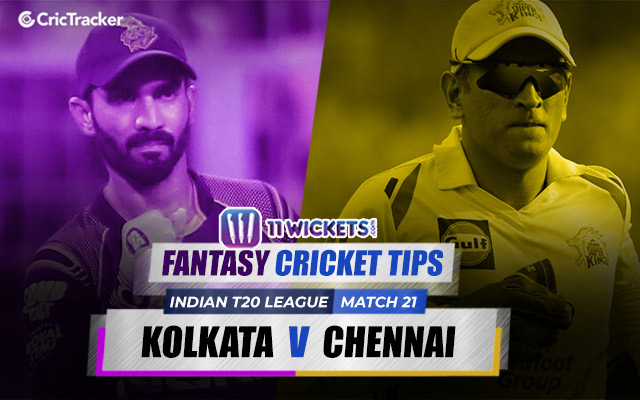 The 21st match of the Indian T20 League 2020 will be played between Kolkata and Chennai at the Sheikh Zayed Cricket Stadium in Abu Dhabi.

Chennai are up and running and are now operating at full strength. With Shane Watson back in form, the team looks in a completely different zone than before. Though their position in the table might not suggest this, they’re a team to beat now and this is simply because an in-form Watson is very bad news to other teams. Chennai looked like themselves in their previous 10-wicket win over Punjab and they made a mockery of the 179-run target.

Kolkata, on the other hand, have got some hard thinking to do. Dinesh Karthik has been out of form but he has been coming out to bat ahead of the in-form batsmen . This decision cost him and his side the game against Delhi. The likes of Rahul Tripathi and Eoin Morgan were kept until the end with Pat Cummins coming out to bat before the former.

Karthik has made some questionable decisions as a captain this season, most of which have heavily backfired. He will need to be at his absolute best with his thinking, if he wants his side to beat a dangerous-looking Chennai side.

Abu Dhabi has been maintaining a sense of uniformity when it comes to the weather. The temperatures for the game on Wednesday will be close to 34°C for most part of the game but will be accompanied by humidity.

The pitch at Abu Dhabi has considerably slowed down but it still remains a fact that once a batsman has his eye in, it is easy for him to rotate the strike and launch those big hits. There has been a lot of assistance for the slower bowlers and one can expect the same trend to continue.

Deepak Chahar (8.5 credits) – Deepak Chahar is one of the best new-ball bowlers going around in the competition and should there be even a slightest bit of wind, Chahar is as potent as anybody. He is a steal for just 8.5 credits and can get you some quick wickets upfront while maintaining a decent economy rate. He has picked up 5 wickets from as many matches.

Ambati Rayudu (8.5 credits) – For just 8.5 credits, Rayudu is a steal, given that he is one of the mainstays of that mighty Chennai batting line-up. He has been in fine form for Chennai and will be critical to their chances of qualification. Rayudu needs to perform if Chennai are to qualify for the playoffs. He has scored 79 runs from 2 innings.

Shubman Gill (8.5 credits) – If Kolkata are performing well in the tournament, a major portion of the credit must go to Shubman Gill. The 21-year-old has been in fine form and has been providing his side with some consistent starts in the power-play. He has matured a lot as a batsman and a testament to that statement is his innings against Hyderabad; where he played the waiting game to win the match for his side. He has 152 runs from 4 innings to his credits. 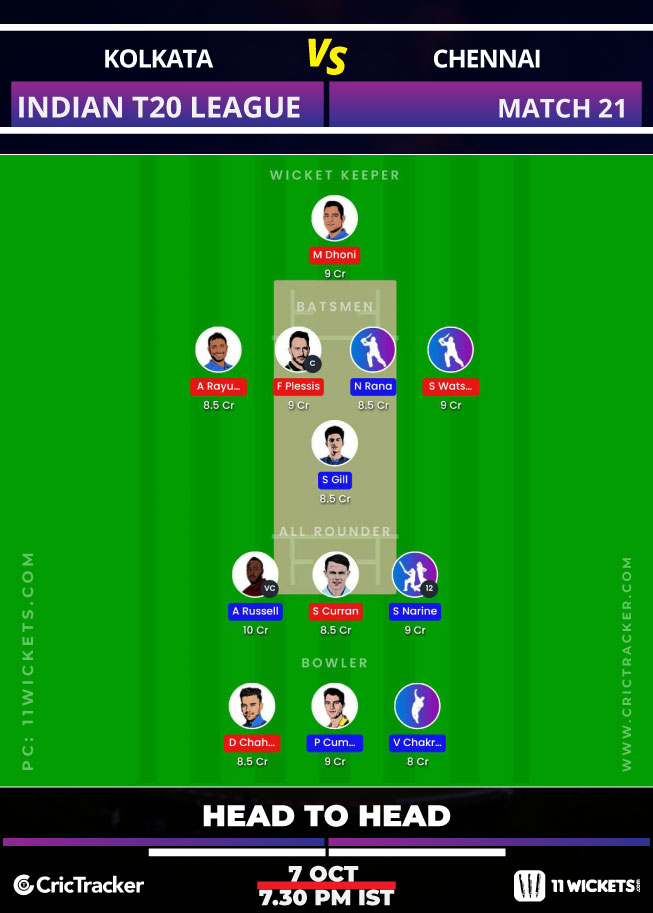 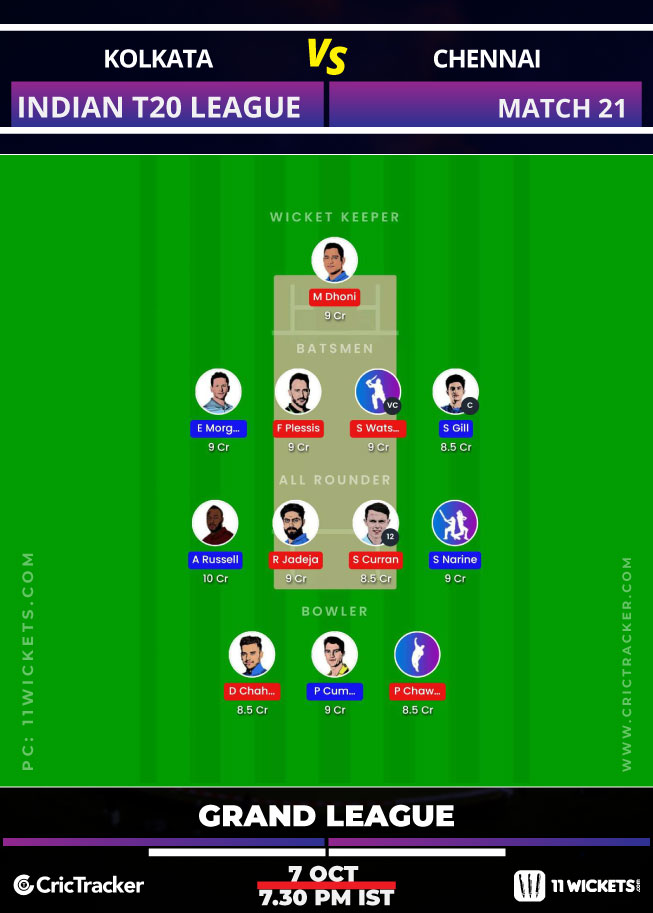 With a lot of turn on offer, it is advisable to have batsmen who are good players of spin bowling and plenty of bowling all-round options. Big hitters have found success on this ground.

Kolkata are expected to win this match.