The record previously by also held by the Rajasthan franchise.

The ninth match of IPL 2020 was nothing short of a bizarre run-fest. Two robust sides– Rajasthan Royals and Kings XI Punjab– locked horns at Sharjah in a high-scoring thriller which turned out to be the finest run-chase in the history of the tournament.

After being put to bat first, Kings XI Punjab, led by the battling brilliance of skipper KL Rahul and Mayank Agarwal, amassed a colossal 223-run total on the scoreboard.

The Karnataka duo stitched the third-highest opening partnership in IPL history, stitching an impressive 183-run stand in the middle. Agarwal slammed his maiden IPL ton– the second-fastest by an Indian– to etch his name into the record books. Rahul, on the other hand, assisted Agarwal well by scoring a 54-ball 69.

But the story wasn’t over yet. The Royals, in their pursuit of a challenging 224-run target, started off impressively despite losing Jos Buttler cheaply. The in-form pair of Sanju Samson and Steve Smith have steered RR to a daunting 69/1 at the end of first six overs of the Powerplay.

Samson, who looked in sublime touch, smoked 7 maximums and 4 fours to unleash one of the best IPL knocks. After the departure of Smith, Samson went on to score a blistering 42-ball 85 to make things easier for RR. However, after his dismissal in the 17th over, the possibility of RR clinching the game was looking nil, especially looking at Rahul Tewatia’s sluggish batting.

However, Tewatia– who was 8 off 19 balls at one stage– did something unbelievable in the 18th over bowled by Sheldon Cottrell. The left-hander whacked the West Indies pacer for five sixes in six deliveries to completely shift the match in his side’s favour.

Jofra Archer also joined the party in the subsequent over by slamming two consecutive sixes off Mohammed Shami. Tom Curran ultimately hit the final nail in the coffin by slamming a four in the final over and steered RR past the finishing line. With this incredible run-chase, Steve Smith and his troops etched their name into the record books.

With their monumental win at Sharjah Cricket Stadium, RR pulled off the highest successful run-chase in the history of IPL. The record previously by also held by the Rajasthan franchise. In 2008, Royals, led by Shane Warne, had hunted down a 214-run total against Deccan Chargers at Rajiv Gandhi International Stadium, Hyderabad. Yusuf Pathan (61), Graeme Smith (71) and Mohammad Kaif (34) were the heroes of RR’s record run-chase. 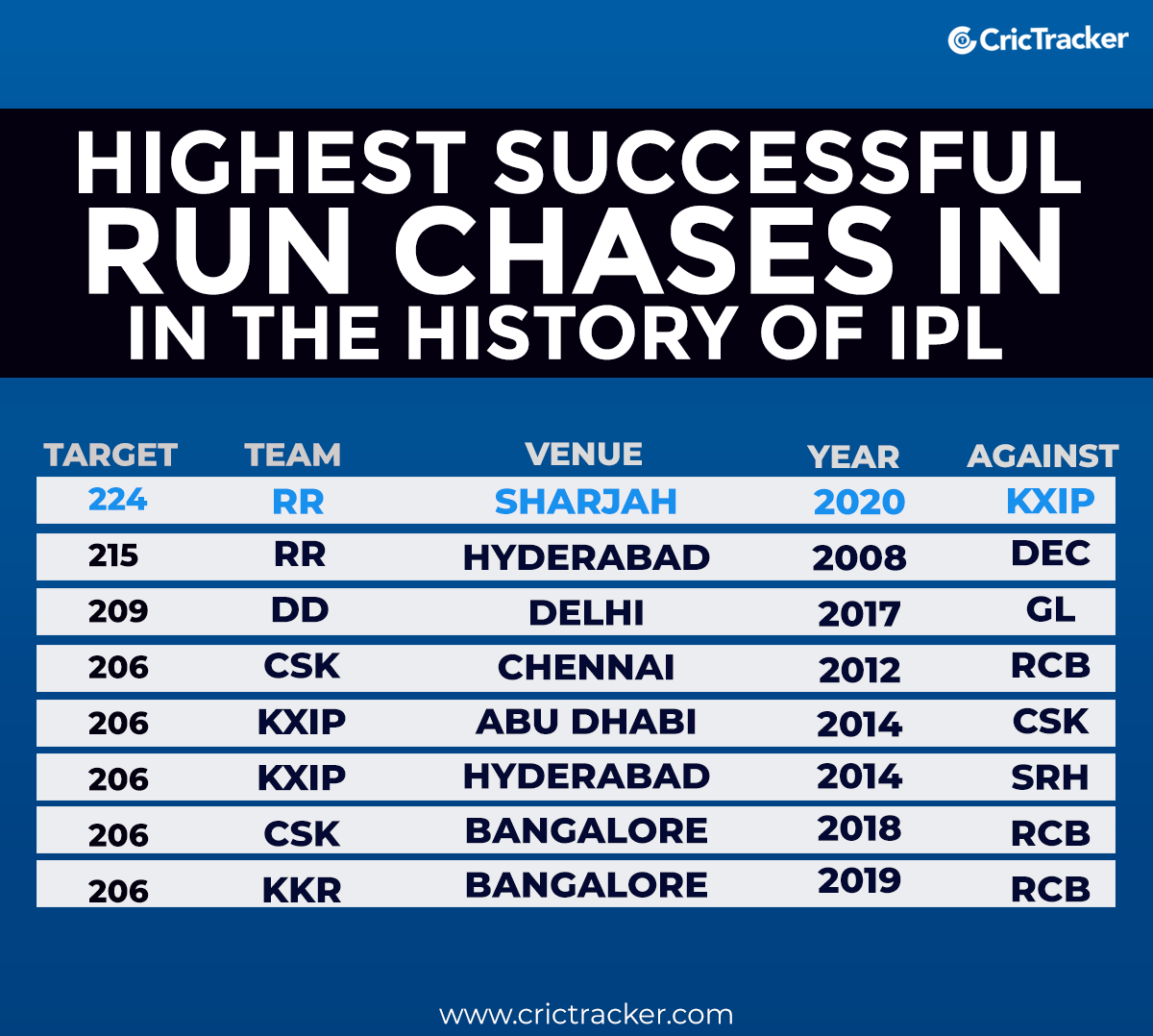