The 31-year-old departed after scoring a vital 43 off 39 deliveries, dwindling RCB’s chances to pull off the run-chase against DC.

The Capitals started off brilliantly with Prithvi Shaw-Shikhar Dhawan pair stitching a 68-run opening stand. Rishabh Pant also smashed a 25-ball 73 but it was Marcus Stoinis who stole the show in the end. The Australian all-rounder scored a quick-fire half-century to steer DC to a dominant 196-run total.

In response, RCB had a woeful start as they lost their three wickets in the Powerplay itself. However, skipper Kohli hung in the middle and kept the scoreboard ticking. In the meantime, he also crossed the milestone of scoring 9000 T20 runs.

The RCB leader has now become the second-fastest player to gather 9000 runs in the shortest format of the game. The 31-year-old, however, departed after scoring a vital 43 off 39 deliveries, dwindling RCB’s chances to pull off the run-chase against DC.

West Indies’ Chris Gayle is sitting first in the list

Kohli achieved the incredible feat in 286 matches (271 innings). West Indies’ stalwart Chris Gayle stands head and shoulders above everyone in the list. The explosive opener, known for his robust batting prowess, had ticked the 9000 run-mark in just 249 innings. 40-year-old Gayle currently has over 13,000 runs under his belt in the T20 format.

The third in the list is Australia international and Sunrisers Hyderabad skipper– David Warner. The southpaw had reached the milestone in 273 innings, just two more than Kohli. Aaron Finch, currently a part of Kohli’s RCB camp, is poised fourth in the list. Finch, at present, has been assigned the opening duties of the Bangalore franchise. The experience T20 campaigner had gathered 9000 T20 runs in 281 innings.

The fifth player in the list is New Zealand Women’s Suzie Bates. The 33-year-old all-rounder has been a prominent name on the international scene for more than a decade now. Bates had ticked the 9000-run mark in T20s in 321 innings. Following Bates are Brendon McCullum, Shoaib Malik and Kieron Pollard, who had ticked the milestone in 325, 335 and 414 innings respectively. 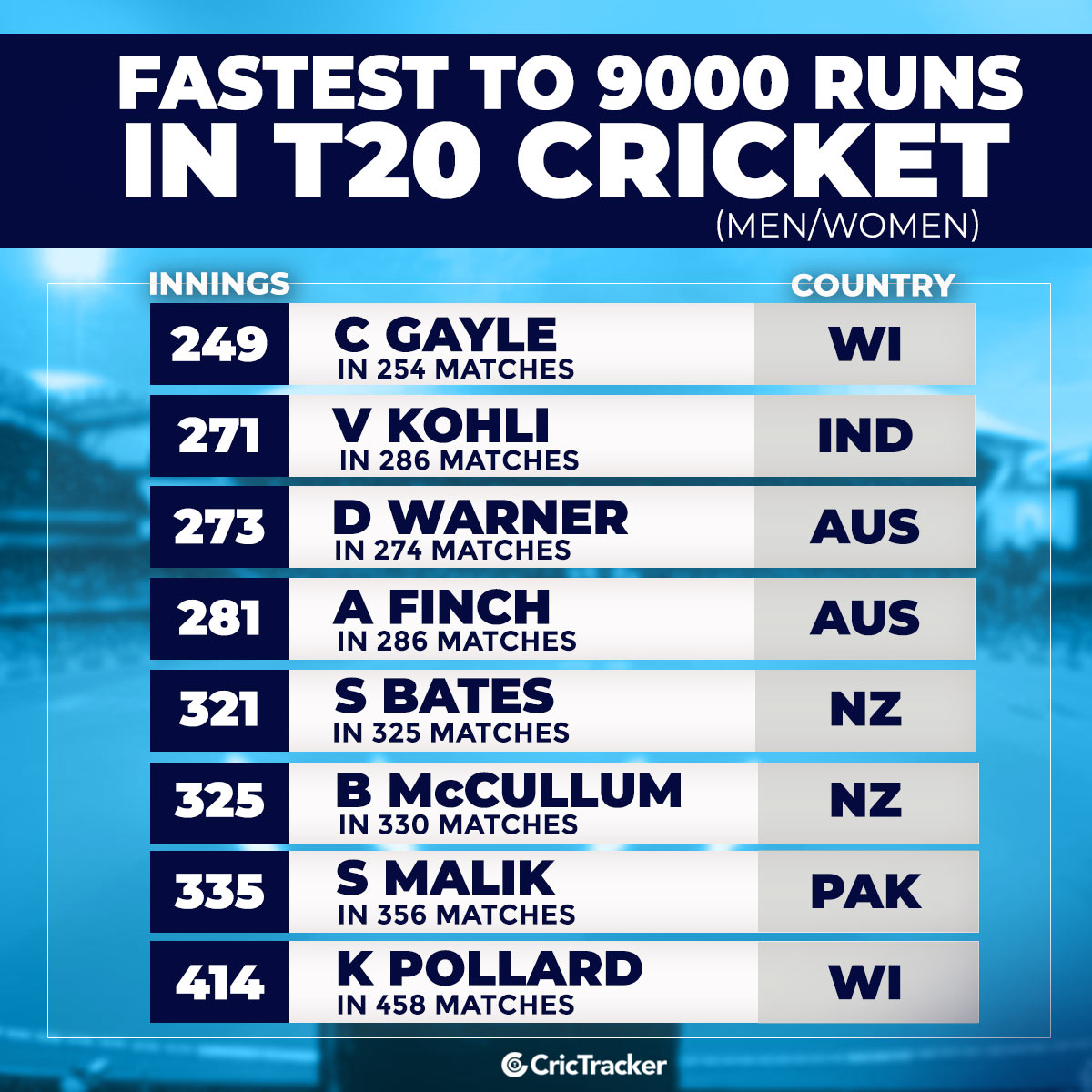