Shreyas Gopal has 12 wickets against RCB at an average and strike-rate of 5.17 and 6.50 respectively.

The Royal Challengers Bangalore (RCB) have had a topsy-turvy run in the 2020 Indian Premier League (IPL). Though Virat Kohli and Co have won two out of their first three games, they could have lost both as well. In the last match against Mumbai Indians (MI), they escaped through the Super Over after posting 201 on the board.

They  need to take care of their NRR which is currently at -1.450.  Their next match is against the Rajasthan Royals (RR) at the Sheikh Zayed Stadium in Abu Dhabi in the first of Saturday’s doubleheader.

RR started their campaign with back-to-back wins in Sharjah, but then succumbed to a 37-run defeat at the hands of the Kolkata Knight Riders (KKR) in Dubai. Both RCB and RR would be going into the game on the back of losses, hoping to make a comeback.

The pitch in Abu Dhabi has been a sporting one thus far and it has assisted the pacers, spinners as well as the batsmen. The track, has however, shown signs of slowing down in the second half.

Hence, batting second can be a tad risky. The conditions will be extremely hot with the temperature around 38 degrees Celsius, Needless to say that the players need to stay hydrated to stay fit.

Playing Combinations for RCB vs RR

Yuzvendra Chahal is in decent form in the IPL, having picked five wickets. Against the Royals, his numbers are exemplary. In nine games, he has 11 wickets from only 26.3 overs at an average and strike-rate of 13.73 and 14.45 respectively.

His economy rate of 5.70 is the best he’s had against any opponent in the IPL. It remains to be seen how the Royals handle his vicious guile and trajectory.

Shreyas Gopal has 39 IPL wickets out of which 12 have come against the Challengers. In four games versus Kohli’s men, the leggie has only bowled 13 overs and conceded runs at an economy of 4.77.

The average and strike-rate of 5.17 and 6.50 are exemplary to say the least. Gopal hasn’t been in the best of forms in this IPL, but keeping in mind his past records, he will fancy his chances against RCB.

RCB vs RR Head to Head

The prediction is for Rajasthan Royals to win the match. 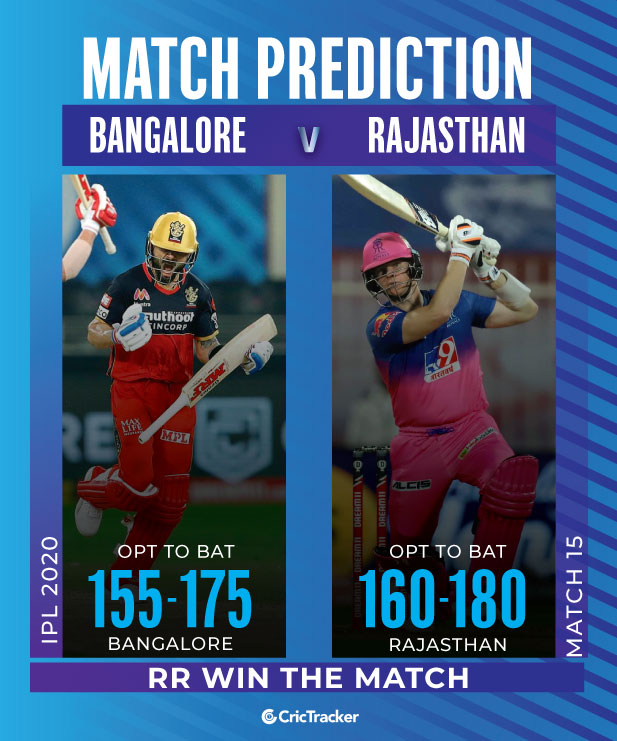