Delhi Capitals (DC) have been on an absolute rampage in the 2020 Indian Premier League (IPL), winning four out of their five matches. Placed second in the points table, Shreyas Iyer and Co are coming off a thumping 59-run victory over the Royal Challengers Bangalore (RCB) in Dubai.

Their net run rate of +1.060 is the second best after Rohit Sharma’s Mumbai Indians (MI), who have +1.488. The Capitals are next scheduled to lock horns with the Rajasthan Royals (RR) on Friday, October 9 at the Sharjah Cricket Stadium.

The Royals, on the contrary, are on a three-match losing streak, but can take heart from the fact that they are unbeaten at Sharjah out of two games. However, even the Capitals won their only encounter in Sharjah, beating the Kolkata Knight Riders (KKR) by 18 runs.

The pitch in Sharjah has been a bowler’s graveyard to say the least. In three games, over 100 sixes have been hit and another run-fest can be expected on Friday. In those matches, the team, batting first put pressure on the opposition.

Hence, teams can avoid chasing though the nature of the pitch won’t change much. The temperature will be around 33 degrees with the humidity in the 50s.

Playing Combinations for RR vs DC

Steve Smith started the IPL with a couple of half-centuries, but has gone into a mini slump. In the last three games, he wasn’t able to cross the double-digit mark. But against the Capitals, Smith can get back to form, bearing in mind his numbers.

Shikhar Dhawan hasn’t been at his best in this IPL, scoring 127 runs at an average of 25.40. However, the left-hander’s numbers against the Capitals are worth appreciating.

RR vs DC Head to Head 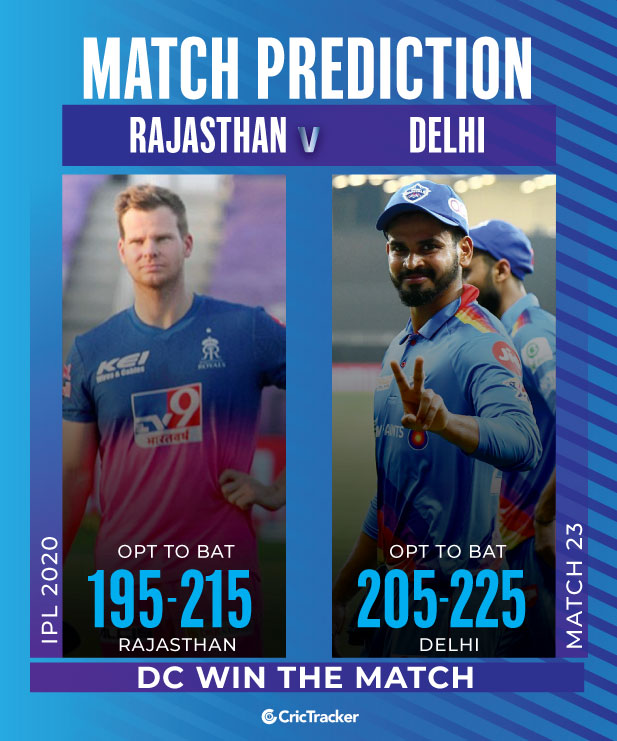