The Royals may need to change their gameplan, playing their first game out of Sharjah against the Knights.

Rajasthan Royals (RR) have made a thunderous start to the 2020 Indian Premier League (IPL), winning both their first two games at the Sharjah Cricket Stadium. Having recorded the highest-ever run-chase in the history of the event, RR must be brimming with confidence.

But after playing in Sharjah, they will now head to Dubai where the conditions will be slightly different if not a whole lot. The Royals, led by Steve Smith are set to lock horns with the Kolkata Knight Riders (KKR) on Wednesday, September 30.

It’s also KKR’s first game in Dubai after a couple in Abu Dhabi. But both Dubai and Abu Dhabi are pretty similar in terms of conditions. Hence, KKR, more than RR, will have better knowledge about what’s expected. Their seven-wicket win over Sunrisers Hyderabad (SRH) will also keep them in good stead.

The pitch in Dubai has improved as the tournament has progressed. The teams, batting first has gotten significant advantage, though MI scored 201 on Sunday, batting second. Boundaries on one side is long and therefore, the batters have to depend on running between the wickets as well. The conditions will be warm with the temperature around 36 degrees Celsius and humidity in the 40s.

Playing Combinations for RR vs KKR

Steve Smith has been in impressive form in the ongoing IPL, having scored 119 runs with a couple of half-centuries. In Dubai, where clearing the boundaries may not be as easy, his role will be critical. Smith is someone, who likes to manoeuvre the field and rotate the strike apart from hitting fours and sixes. Against the Knight Riders, Smith has 216 runs from nine games with two half-centuries.

Dinesh Karthik might not be in the greatest of form, but his numbers against the Royals can’t be dismissed. In 23 matches, he has 518 runs at an average and strike-rate of 37 and 135.96 respectively. He batted at number three in both the games and he might just want to give it a shot there again. The Royals’ bowling has looked a tad off-colour and DK will look to fancy his chances.

RR vs KKR Head to Head

The prediction is for Kolkata Knight Riders to win the match. 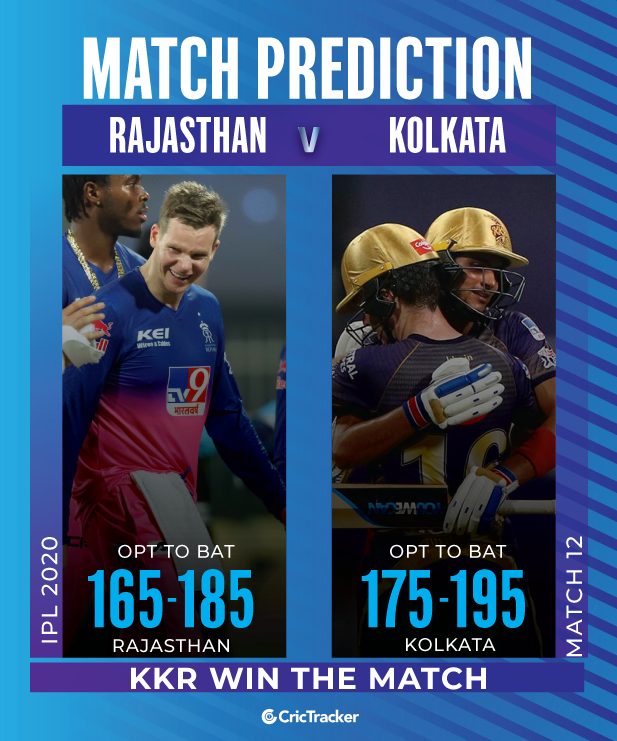