Kings XI Punjab (KXIP) lost out in the Super Over against the Delhi Capitals (DC) in their opening match of the 2020 Indian Premier League (IPL). However, KL Rahul and Co hit back, beating the Royal Challengers Bangalore (RCB) by 97 runs. The victory also pushed their net run rate to +2.425.

Their next match is against Steve Smith’s Rajasthan Royals (RR) on Sunday at the Sharjah Cricket Stadium. Along with Rahul and Mayank Agarwal’s heroics, KXIP’s bowling has also been top-notch. The Royals, on the other hand, won by 16 runs after posting 216 against the Chennai Super Kings (CSK).

But the last and only time RR met KXIP in Sharjah, the latter came out trumps. Jos Buttler is returning to the Royals’ team. He was in decent form in the series against Australia and would be looking to carry on.

The pitch in Sharjah is expected to be a bowler’s graveyard yet again. The short boundaries will make it tough for the bowlers. Spinners may extract something out of the surface.

The Royals’ bowlers, barring Jofra Archer, were expensive last time and they’ll have to take care of the same. The temperature will be around the 24 degrees Celsius mark with the humidity mostly in the low-60s.

Playing Combinations for RR vs KXIP

Jos Buttler, among all teams, has scored the most runs against the Punjab franchise. In seven games, he has 335 runs at an average and strike-rate of 47.86 and 154.38 respectively.

The right-hander has four fifties in those games with a top score of 82. He has evolved as a white-ball player over the years and it goes without saying that if he gets his eye in, KXIP could find themselves in trouble.

Leaving aside Rahul’s recent from after his 132* against RCB, his numbers against the Royals are fantabulous. In seven matches against them, he has 275 runs at an average and strike-rate of 55 and 127.31 respectively.

The Englishman has three fifties as well to go with a top score of 95. Also, he will be looking to get the Orange Cap back from Faf du Plessis, who surpassed him on Friday’s match against Delhi.

The prediction is for Kings XI Punjab to win the match. 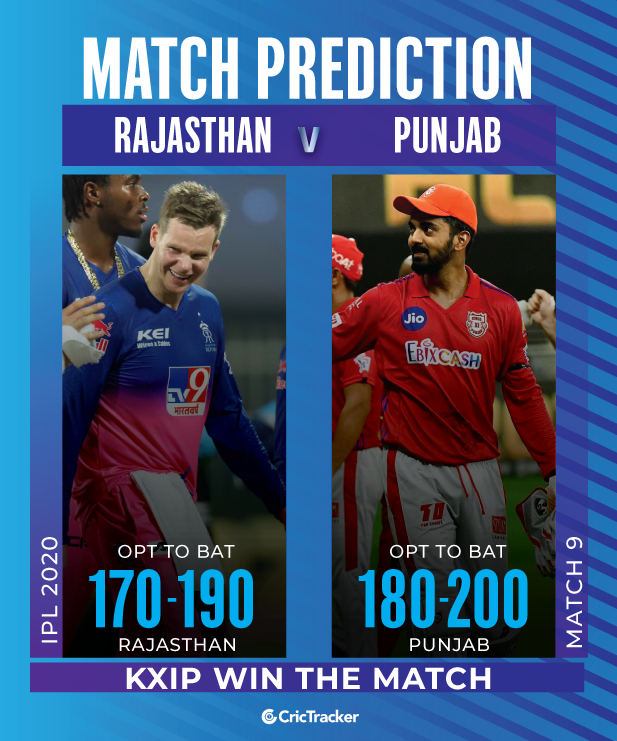