The Royals are on a four-match losing streak.

The Sunrisers Hyderabad (SRH) started the 2020 edition of the Indian Premier League (IPL) with a couple of defeats. However, the team, led by David Warner have climbed the ladder and have made their way into the top four as well.

In their last game, the Orange Army defeated KL Rahul’s Kings XI Punjab (KXIP) by 69 runs in Dubai after putting up a mammoth 201 on their board in their 20 overs. In their next match, Warner’s men will be locking horns with Steve Smith’s Rajasthan Royals (RR) on Sunday, October 11 at the Dubai International Cricket Stadium.

The Royals started with a couple of wins, but then lost three games on the trot and went down the barrel. On Friday, October 9, the Royals lost to the Delhi Capitals (DC) by 46 runs and are now on a four-match losing streak.

The pitch in Dubai has gotten better for batting as the tournament has progressed. Quite a number of sixes have been hit at the venue. But it’s also pertinent to note that the chasing teams haven’t found it easy thus far.

Hence, teams would be better off batting first and putting runs on the board. The temperature will be around the 36 degrees Celsius mark with the humidity in the mid-30s.

Playing Combinations for SRH vs RR

Jonny Bairstow stated the 2020 IPL with some cautious knocks. But he has started to find his mojo with the bat in hand. The right-hander notched 97 runs against KXIP and that should keep him in a positive frame of mind going into the next encounter.

Last year, he played one game against the Royals and scored 45 runs. In that innings, he went along at an impressive strike-rate of 160.71.

Sanju Samson has impressive numbers against the Sunrisers. In 14 matches, he has 423 runs at an average and strike-rate of 42.30 and 126.65 respectively. Last year, he also notched an unbeaten 102.

The youngster will be looking to replicate something similar even this time around. In the ongoing edition, he started with a couple of half-centuries and then entered into a mini-slump.

SRH vs RR Head to Head 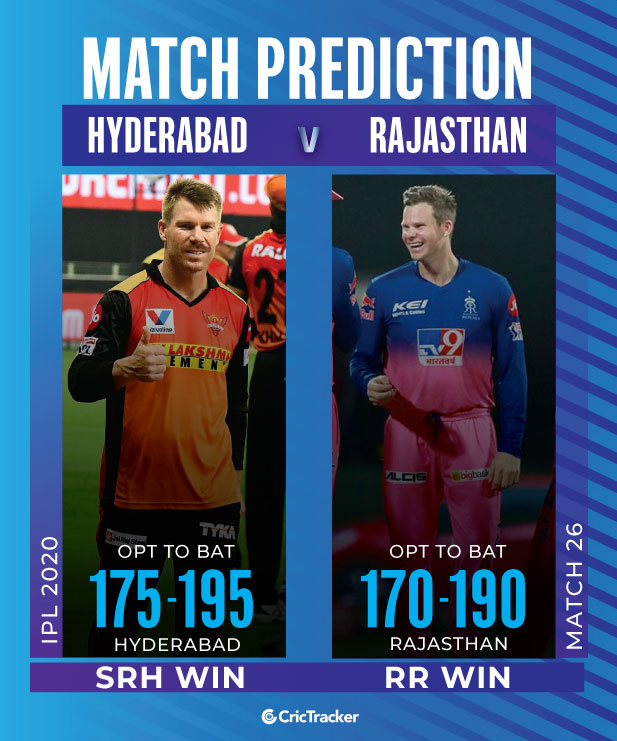