Which batsmen have remained not out in 90s the most number of times in IPL?

There have been a total of 31 instances in the history of the 13 editions of the cash-rich league, when a batsman has remained not out while playing in 90s, involving 22 players.

The 25th game of the 13th edition of the Indian Premier League (IPL 2020) witnessed the Royal Challengers Bangalore (RCB) registering their biggest win over Chennai Super Kings (CSK) by 37 runs. Chasing a total of 169 posted by RCB on the board owing to the brilliant 90* from their skipper Virat Kohli, CSK ended their innings on 135/8 to lose in yet another painful chase. This turned out to be the fourth win for Bangalore outfit as they now have 8 points after playing six matches while CSK is positioned at seventh place in the points tally with only four points in their bag.

Winning the toss, captain Virat Kohli made an easy choice of batting first. However, the team didn’t start well as the opening batsmen Aaron Finch got out early. Though the duo of Kohli and Devdutt Padikkal looked promising on the field, the latter got out after scoring a 34-ball 33, followed by AB de Villiers who went back to the pavilion after a duck. The all-rounder Washington Sundar also couldn’t do much as he scored only 10 runs while batting at 5. The Men in Red and Gold were soon found struggling as they were standing at a paltry total of 93/4 in the 15th over.

However, the audience soon witnessed a carnage from the skipper Kohli as he smashed his second fifty of the IPL 2020 and attacked every bowler of the Yellow Army in the death overs to take his team towards a respectable total of 169/4 in the 20-overs game. Putting an exhibition of some classy batting, Virat amassed 90 off 52 deliveries with four fours and as many sixes to his name. Shivam Dube also made a notable contribution as he stitched a much-needed partnership with the captain and made 22 off 14 balls.

Virat Kohli names another record to his name in the IPL

As far as the bowlers are concerned, Sundar gave the much-needed breakthrough to RCB as he dismissed the opposition openers Faf du Plessis and Shane Watson followed by Chris Morris who took three wickets in his two death overs. Isuru Udana and Yuzvendra Chahal had one wicket each to their name.

Apart from making his team win in one of the crucial matches, the skipper Virat also made another record. Delhi-Stalwart topped the charts in terms of remaining not out in 90s in IPL. Including his flamboyant knock of 90* off 52 deliveries, Kohli has remained not out in 90s thrice in the IPL, the joint-most along with Delhi Capitals’ opener Shikhar Dhawan.

There have been a total of 31 instances in the history of the 13 editions of the cash-rich league, when a batsman has remained not out while playing in 90s, involving 22 players. Virat and Shikhar are followed by Kings XI Punjab’s Chris Gayle and Rajasthan Royals’ Jos Buttler, who have two such scores each.

The first time Virat had remained not-out in 90s in IPL was back in 2013. In a match against Sunrisers Hyderabad in 2013, Kohli had missed his deserved century as he was not out on 93*. This was followed by 92* in a match against Mumbai Indians (MI).

Batsmen remaining not out in 90s in IPL 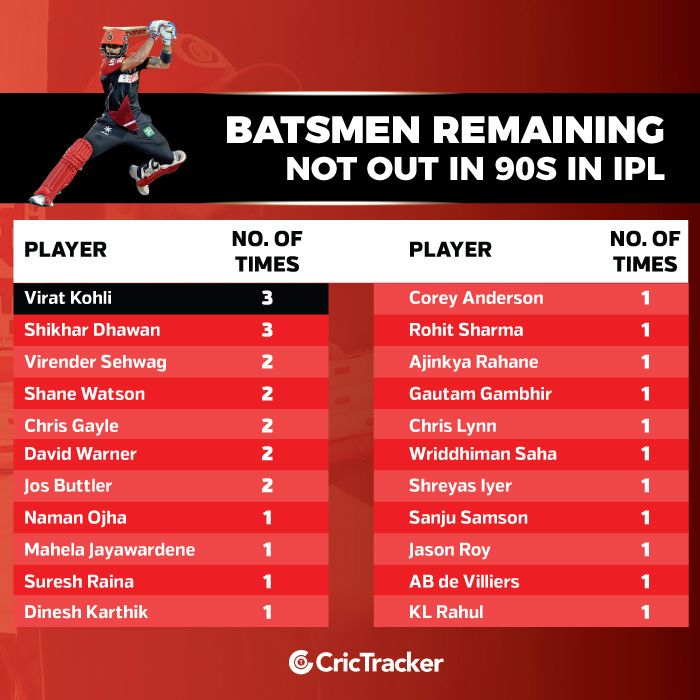